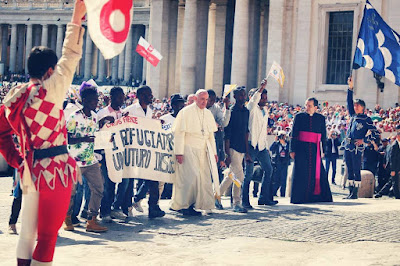 Why doesn’t the Swiss Guard arrest this humble man?


Yes, there is an official World Refugee Day since the UN General Assembly, on 4 December 2000, adopted a resolution which decreed every June 20th would be this day.  Here’s how the United Nations has been selling their holiday to the world with emotional music, celebrities, world leaders, and the lie that all ‘refugees’ are fleeing war.

When will any of these celebrities put their money where their mouth is and navigate the bureaucratic laws in order that they can host some of the ‘refugees’, living say for example in the jungle that Calais, France has become, in their homes?  We’re not holding our breathes waiting for this to happen.

Caritas Europa is calling on the EU and especially its Member States to:

* Invest effectively in saving lives at sea;
* Open more safe and legal channels of entry into the EU, such as by introducing affordable and accessible humanitarian visas and engaging in more resettlement;
* Facilitate family reunification for refugees and migrants, hence fostering integration in receiving countries;
* Stop and reverse the externalisation of EU migration policies;
* Cease using readmission and return agreements as a condition for development aid.

source: ICN, Caritas on refugee situation - its all about European core values!


Remember our previous post, Catholics in Italy are told to recite the Rosary in silence at St. Anthony's Church, so as not to offend the African Moslem invaders occupying it, which highlighted how Caritas Internationalis views Moslem invaders as higher human beings on their political correct scale than the native born Catholics.  Francis views the Moslem invaders as his “brothers” even when they throw Christians overboard on the voyage to Europe because “the Christian does not exclude anyone” and “the name of God is mercy”.

This push to de-Christianize Europe in the name of fraternal brotherhood is coming from many places such as: Caritas, other organizations, the United Nations, European intellectuals, and church officials.  Where are the Catholics in Europe willing to put a stop to this?

Italy’s national clown, Roberto Benigni, summed up Francis and the modernist revolution he represents when he said, “He is bringing the Church, with all his strength, to a place we have almost forgotten. We don't remember it. He is taking us to Christianity, to Jesus Christ, to the Gospel. He is launching the Church toward Christianity. It is something incredible: The religion of the humanity of God, the divinity of man. He is bringing it. And how is he doing it? Through mercy.”  Mr. Benigni sadly is not kidding when he says this.  So, Francis is bringing the church closer towards Christ and His Gospel by de-Christianizing Europe through the process of Islamification.  After all, Moslems are men so they must be divine.

The “brothers” of Francis that he wants to flood Europe with.

Many years ago the great Catholic man, Abp. Marcel Lefebvre, whom had worked for years as a missionary in Africa and was intimately familiar with Islam and Moslems said the following:

To read more about Abp. Lefebvre’s  above statement click here.


If only Catholics had listened back then to people such as Abp. Lefebvre and practiced their Faith, they wouldn’t find themselves in the predicament they are in today.  Will the Catholics of today stand up for their Faith and their countries?  Will their fellow Europeans ever wake up?   Or will they continue to show up at Francis’ general audiences and go along with his program to de-Christianize Europe.  If they don’t wake up soon, it will be the death of them, their children and the civilization of their native lands.  In fact it may be too late already.  May God have mercy on us and spare Europe from this self-inflicted plague which has descended upon it. 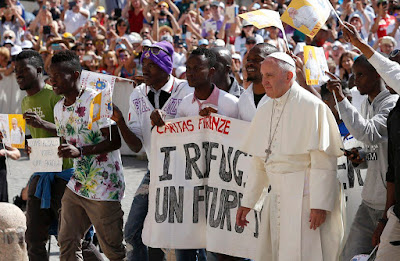 Francis is leading the charge!
Posted by hereisjorgebergoglio at 2:46 PM