“What is reconciliation? Taking one from this side, taking another one for that side and uniting them: no, that’s part of it but it's not it ... True reconciliation means that God in Christ took on our sins and He became the sinner for us. When we go to confession, for example, it isn’t that we say our sin and God forgives us. No, not that! We look for Jesus Christ and say: 'This is your sin, and I will sin again'. And Jesus likes that, because it was his mission: to become the sinner for us, to liberate us.”

“Christ became sin for me! And my sins are there in his body, in his soul! This it's crazy, but it's beautiful, it's true! This is the scandal of the Cross!”


There is so much obvious heresy in the above statement of Francis, that if one needs it pointed out to them then they are most certainly in need of attending a Catholic catechism class.  From day one of his pontificate, starting with him having the people bless him after his election, it has been evident that Jorge Mario Bergoglio has had no modicum of what it means to be a Catholic. 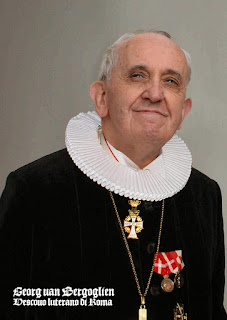 Catholic? Nope, he sounds like Martin Luther!
Posted by hereisjorgebergoglio at 6:54 AM