Francis says most marriages are invalid because couples don't understand their wedding vows! 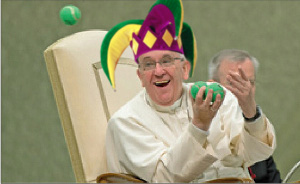 This humble court jester clowns around all day long


[underlines are Call Me Jorge...'s for emphasis]

Rome, Italy, Jun 16, 2016 / 02:56 pm (CNA/EWTN News).- Pope Francis said Thursday that the great majority of sacramental marriages today are not valid, because couples do not enter into them with a proper understanding of permanence and commitment.
“We live in a culture of the provisional,” the Pope said in impromptu remarks June 16. After addressing the Diocese of Rome’s pastoral congress, he held a question-and-answer session.
A layman asked about the “crisis of marriage” and how Catholics can help educate youth in love, help them learn about sacramental marriage, and help them overcome “their resistance, delusions and fears.”
The Pope answered from his own experience.
“I heard a bishop say some months ago that he met a boy that had finished his university studies, and said ‘I want to become a priest, but only for 10 years.’ It’s the culture of the provisional. And this happens everywhere, also in priestly life, in religious life,” he said.
“It’s provisional, and because of this the great majority of our sacramental marriages are null. Because they say “yes, for the rest of my life!” but they don’t know what they are saying. Because they have a different culture. They say it, they have good will, but they don’t know.”
He spoke of his encounter with a woman in Buenos Aires who “reproached” him. She said that priests study for the priesthood for years and can get permission to leave the priesthood to marry and have a family. For the laity, this woman said, “we have to do the sacrament for our entire lives, and indissolubly, to us laity they give four (marriage preparation) conferences, and this is for our entire life.”
Pope Francis said that marriage preparation is a problem, and that marital problems are also linked to social situations surrounding weddings.
He recounted his encounter with a man engaged to be married who was looking for a church that would complement his fiancée’s dress and would not be far from a restaurant.
“It’s social issue, and how do we change this? I don’t know,” the Pope said.
He noted that as Archbishop of Buenos Aires he had prohibited marriages in the case of “shotgun weddings” where the prospective bride was pregnant. He did this on the grounds there was a question of the spouses’ free consent to marry.
“Maybe they love each other, and I’ve seen there are beautiful cases where, after two or three years they got married,” he said. “And I saw them entering the church, father, mother and child in hand. But they knew well (what) they did.”
Pope Francis attributed the marriage crisis to people who “don’t know what the sacrament is” and don’t know “the beauty of the sacrament.”
“They don’t know that it’s indissoluble, they don’t know that it’s for your entire life. It’s hard,” the Pope said.
He added that a majority of couples attending marriage prep courses in Argentina typically cohabitated.
“They prefer to cohabitate, and this is a challenge, a task. Not to ask ‘why don’t you marry?’ No, to accompany, to wait, and to help them to mature, help fidelity to mature.”
He said that in Argentina’s northeast countryside, couples have a child and live together. They have a civil wedding when the child goes to school, and when they become grandparents they “get married religiously.”
“It’s a superstition, because marriage frightens the husband. It’s a superstition we have to overcome,” the Pope said. “I’ve seen a lot of fidelity in these cohabitations, and I am sure that this is a real marriage, they have the grace of a real marriage because of their fidelity, but there are local superstitions, etc.”
“Marriage is the most difficult area of pastoral work,” he said. 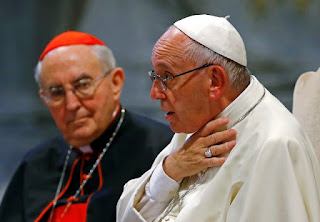 Dear reader, did you catch all that?  Most marriages are invalid because couples don’t understand their wedding vows however don’t fret that as Francis also said many cohabitations are true marriages!  So much for sacramental theology!  Fornication is now marriage!  White is black and black is white, what was virtue is now sin and sin is now a virtue.  Just remember when this fool opens his mouth it’s magisterium!

“I’m constantly making statements, giving homilies. That’s magisterium. That’s what I think, not what the media say that I think. Check it out; it’s very clear. ”
- Francis in 7 December 2014 interview -


straight from the clown’s mouth
Posted by hereisjorgebergoglio at 4:03 PM