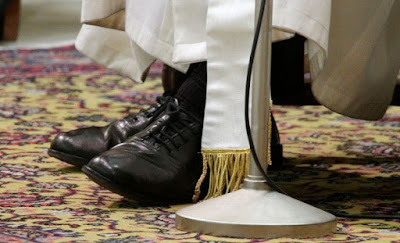 Remember back to 2013, soon after Jorge Mario Bergoglio was elected in the conclave, he started to do revolutionary things. One of them was he decided to no longer wear the red shoes of a pontiff. He instead opted to keep wearing his black shoes. Why did he do such a thing?

Jorge was so ‘poor’ and had such a disregard for clothes that his friends took up a collection to buy him a new pair of black dress shoes before he went to the conclave.  Which brings the question to mind about his diocese of Buenos Aires, was it bankrupt or having monetary difficulties?  The answer to that is yes but it’s what one would expect when one employs a friend who is an evangelical protestant to run the finances of the diocese.

After Jorge was elected, he refused to wear the traditional red shoes. The only pontiff of memory who has ever done this was John Paul II who often switched colors and shades.

1) the blood Christ shed in His Passion and His Crucifixion which was done in reparation for our sins and,

2) the blood of martyrs of the Church.


It is interesting to note Francis, once again, shying away from anything to do with Christ and His Crucifixion. This seems to reflect not only Francis’ mind but also the Novus Ordo Missae which states in its rubrics that its Mass is a remembrance of the last supper unlike the Tridentine Mass which is the Sacrifice of Calvary.

All in all the wearing of black shoes as Francis does is a small thing on the surface however, this act foreshadowed the revolutions he would usher in the future to come, beginning with not following any of the traditions of the papacy and ending with the perversion of the Christ.

Posted by hereisjorgebergoglio at 5:13 AM