the Noahide Novus Ordo and the power behind it 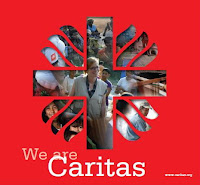 The Catholic Church’s largest charity has adopted the Jewish community’s model for volunteering in what could be “a first” for the Jewish charity sector.

He added: “They’re coaching and mentoring us, and without their generosity and ambition, we would not be able to provide this. Our work is a concrete example of how different faith communities can share values and work together for the common good.”

The new Catholic Volunteering Service is “modelled very closely on the JVN and based on the same principles,” said JVN director Leonie Lewis, who said the launch was a landmark event in Jewish-Catholic relations.

“This could be a first in the Jewish charity sector. We believe our faiths and faith values have much in common and that we can deliver on certain programmes together that can make significant difference to our communities and particularly the wider UK community.”

Lewis also said there is “some preliminary discussion and interest from one or two Muslim-led projects to establish the Muslim Volunteering Network”.

Expect Caritas to ratchet up ‘assistance’ to the Moslems invaders coming Europe under the auspices of the brotherhood of man and demand that the torrent of them arriving in Europe be increased.  Also look for Caritas to move their literature and philosophy away from anything even remotely resembling Christianity and continue to move towards the insane kosher approved political correct propaganda written by the rabbis.  It was only two weeks ago workers for Caritas told Catholics reciting the Rosary in a church to recite it silently so as not to offend the Moslems that Caritas and the local diocese had placed there.

One of the past behaviors of Caritas


and its future will only be worse.
more on Caritas:

Posted by hereisjorgebergoglio at 12:51 PM