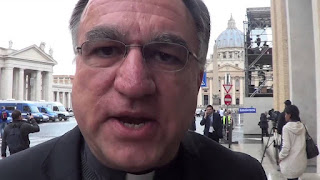 In May 2016, Thomas ‘three Martinis a day’ Rosica received the Distinguished Communicator Award from Brooklyn’s DeSales Media Group.  Rosica, the head of Pepper + Darkness and the English language papal spokesman couldn’t resist taking a few moments in his speech to vilify and lay into the Catholic blogosphere.  Rosica seems more than a little bitter that his role as a gatekeeper is slowly but surely sliding into the abyss.  Below is an excerpt of Rosica’s remarks.  To read his speech in its entirety click here.  As always the underline are ours for emphasis.

The Digital World and Catholic Blogosphere

Let me identify a second battleground where a field hospital is badly needed in our media efforts. We can each name a country or land where blood, terror and violence seem to have the upper hand. But the big battlefield before humanity is also the digital world: one that requires no passport and travel ticket to enter. You only need a keyboard, a screen or a hand-held device. It is in that universe that many wars are waged each day and where many wounded souls live, walk or troll. It is an immense battleground that needs many field hospitals set up to bind wounds and reconcile warring parties.

In the wild, crazy world of the blogosphere, there is the challenge of accountability and responsibility. On the Internet there is no accountability, no code of ethics, and no responsibility for one’s words and actions. It can be an international weapon of mass destruction, crossing time zones, borders and space. In its wake is character assassination, destruction of reputation, calumny, libel, slander and defamation. What view do others have of us when they view our blogs? If we judged our identity based on certain “Catholic” websites and blogs on the Internet, we would be known as the people who are against everyone and everything! If anything, we should be known as the people who are for something, something positive that can transform lives and engage and impact the culture. To what degree are our blogs, websites and programming the expression of the wealth of the Christian patrimony and successful in transmitting the Good News that the Lord has asked us to spread?

Many of my non-Christian and non-believing friends have remarked to me that we “Catholics” have turned the Internet into a cesspool of hatred, venom and vitriol, all in the name of defending the faith! The character assassination on the Internet by those claiming to be Catholic and Christian has turned it into a graveyard of corpses strewn all around. Often times the obsessed, scrupulous, self-appointed, nostalgia-hankering virtual guardians of faith or of liturgical practices are very disturbed, broken and angry individuals, who never found a platform or pulpit in real life and so resort to the Internet and become trolling pontiffs and holy executioners! In reality they are deeply troubled, sad and angry people. We must pray for them, for their healing and conversion!

straight from his mouth

Posted by hereisjorgebergoglio at 5:39 AM