Have Ann Barnhardt and Eric Gajewski been listening to Benedict XVI???

Apparently not, as Benedict XVI once again publicly demonstrates he isn’t the Pontiff with his actions and words.


Two bloggers on the internet, who also produce a slew of interviews are the potty mouth Ann Barnhardt, who says such gems as usury is Godly and if you think otherwise you’re an anti-Semite not to mention closed her brokerage business under suspicious circumstances, and the head of the ‘Order of the Eagles’ Eric Gajewski who gives the commands but doesn’t take orders while he is awaiting for official approval from the church for his make-believe military order, are pushing the idea that there is no way that Francis is pope so therefore the pope is Benedict XVI.

One can if they so wish, peruse their blogs and find articles in the case of Gajewski and one maybe possibly more in Barnhardt’s situation.  Below we’ll quote from recent posts (17 March 2016 — Gajewski & 19 June 2016 — Barnhardt) of each blogger then quote from Benedict XVI’s speech given at the 65th anniversary of his ordination. 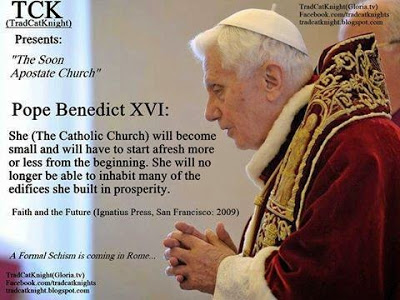 and finishes with this,

Now on to Barnhardt, who opens Vocem Alienorum: The Voice of Antipope Francis Bergoglio Is the Voice of A Stranger with this,

and concludes with this paragraph,

Apparently Benedict XVI hasn’t read the memo as the other day on the celebration of his 65th ordination he said the following words,

Thanks above all to you, Holy Father! Your goodness, from the first moment of your election, in each moment of my life here, moves me, it really carries me interiorly. More than in the Vatican Gardens, with their beauty, your goodness as the place where I live: I feel protected. Thank you, too, for the word of appreciation, for everything. And we hope that you will carry us all forward on this way of Divine Mercy, showing the way of Jesus, toward Jesus, towards God.

Does that sound like Benedict XVI never resigned his office?  Or he did it under duress?  Is he unhappy with the Second Vatican Council or the fruits of it?  Instead, his words speak of Francis’ goodness and how it sustains him interiorly!  He goes on to say Francis’ goodness is more beautiful than the Vatican Gardens and makes him feel protected!

Do proponents of this zany thinking ever read or listen to what Benedict XVI says?  Or do they start from a preconceived conclusion and filter out all information which doesn’t fit it?

It’ll be interesting to see what is revealed in the upcoming interview book by Peter Seewald about Bendict XVI’s resignation, his thoughts on the election of Jorge Mario Bergoglio, and his breakup of the ‘gay lobby’ in the Vatican.  Call Me Jorge... is guessing that Gajewski and Barnhardt either ignore or cherry-pick statements out of context from this soon (September 2016) to be released book.

We hope and pray that Catholics are not listening to bloggers like Barnhardt who is new to this bizarre theory and Gajewski who has been espousing it since July 2014 if not before.  People should stop paying attention to and stop supporting pied-pipers such as the two mentioned above.  Being a Catholic begins with prayer, the sacraments, and reading Catholic teachings. 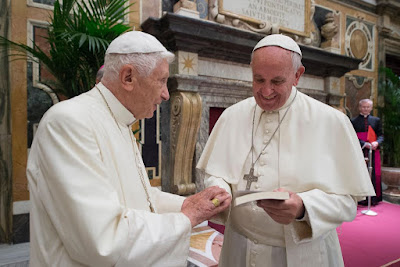 Posted by hereisjorgebergoglio at 4:17 PM