The late Driss Slaoui, the then: Minister of Justice, Minister of Finance, Minister of National Economy, Commerce, Industry, Mines, Merchant Marine and Agriculture, Wali of Bank al-Maghrib, director of the Royal Cabinet, Ambassador of Morocco to the United Nations, as well as personal advisor to King Hassan II, gets blessed by the crazy chabad rabbi — Menachem Mendel Schneerson in the first video below.  Don’t worry, Driss Slaoui also got a magic Federal Reserve Note for King Hassan II and a blessing too.

Who is Schneerson and why is he important?  Schneerson was the head rebbe of the Chabad-Lubavitch sect and claimed to be a descendant of King David.  Some of his sect followers believed him to be the ‘moshiach’ or messiah.  President Jimmy Carter on 18 April 1978 inaugurated Education and Sharing Day when he declared that every 11 Nissan (Menachem Mendel Schneerson’s birthday) this day be celebrated.  In 1999, the bill H.J.Res.104 proclaiming Education and Sharing Day stated that the Noahide Laws promoted by Talmudic Judaism are the bedrock of society.  Rebbe Scheerson’s influence rarely makes the mainstream media.  Rabbis and followers of his Chabad-Lubavitcher school of Tamludic thought fill the upper echelons of government in the United States of America as well as Israel.

Rebbe Schneerson and King Hassan II kept in regular communication through the exchange of letters.  The longest running Chabad House in the world is in Morocco. Chabad runs six Chabad-Lubavitch Centers in total in the country in the cities of Agadir, Meknes, and Casablanca. 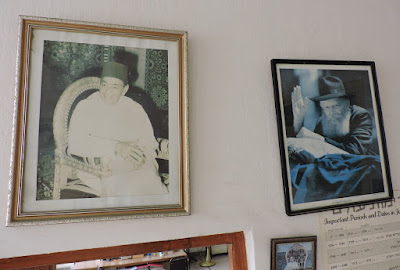 Photos of the late King Hassan II and the late Rebbe Schneerson adorn the wall of a Chabad-Lubavitch Center in Casablanca, Morocco.


“As far as we are concerned, we can pray to the Rebbe and he can deal with God for us.  The Rebbe was not created; the Rebbe has always been around and always will be.”
“When the messiah reveals himself, those who didn't see him won't be saved, so you should work on... Look, what you need to do is start with God and work your way up to the Rebbe.”

source: Harretz, The Lubavitcher Rebbe as a God

Even though he is long dead and isn’t visible in the video below, the crazy chabad rabbi Menachem Mendel Schneerson is still passing out magical Federal Reserve Notes to his gullible followers.


“To the thief it's not worth anything -- no more than just $1.  It's like a (Pablo) Picasso painting. You know, to a thief it's just a piece of canvas. But to somebody who appreciates art, it may be worth millions of dollars.”
— Rabbi Shlomo Ezagui on the magical kabbalistic talisman $1 —
Posted by hereisjorgebergoglio at 10:49 PM