Where are the missing millions?

Francis officially confirmed while being interviewed on his airplane flight from Armenia to Rome that he would be visiting Auschwitz-Birkenau during his trip to Poland for World Youth Day — Kraków 2016. 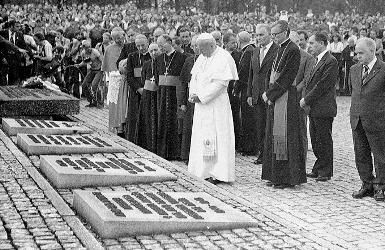 When Saint John ‘the Great’ Paul II made his visit to the former concentration work camp on 7 June 1979 he paused and prayed at The International Monument in Auschwitz II (aka Birkenau).  The commemorative plaque he examined read as follows. 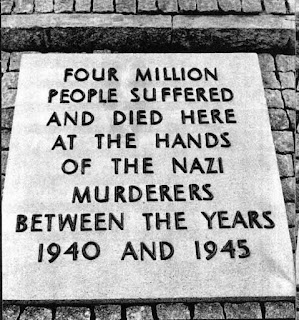 This plaque and nineteen others containing the same phrase
in nineteen different languages were unveiled in 1967.  They
remained on display at The International Monument until 1990.


FOUR MILLION PEOPLE SUFFERED AND DIED HERE AT THE HANDS OF THE NAZI MURDERERS BETWEEN THE YEARS 1940 AND 1945.

Fast-forward to 28 May 2006 and Benedict XVI makes a trip to Auschwitz-Birkenau where he also visits The International Monument. 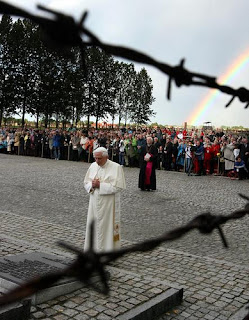 The noahide rainbow and the barb wire framing
this photo of Benedict XVI are a ‘nice’ touch.


How did the commemorative plaque he viewed read? 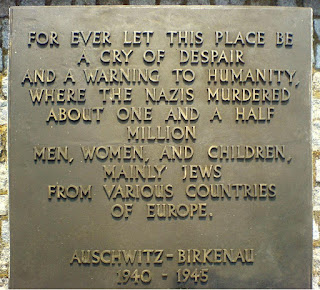 In 1995 twenty new plaques with a different inscriptions
were placed at The International Monument.


THE NAZIS MURDERED ABOUT ONE AND A HALF MILLION MEN, WOMEN AND CHILDREN MAINLY JEWS FROM VARIOUS COUNTRIES OF EUROPE. AUSCHWITZ-BIRKENAU 1940-1945

The commemorative plaques placed in the ground in 1995 have remained there despite the United States Holocaust Memorial Museum further revising that figure downward to 1,085,000 people.  When will the directors of Auschwitz-Birkenau Foundation get their stories straight?  Will the plaques at The International Monument ever contain any hard facts?


Perhaps Francis during his tour of Auschwitz-Birkenau could ask the museum directors,  “where did the 2.5 million people go?”
Posted by hereisjorgebergoglio at 12:06 PM