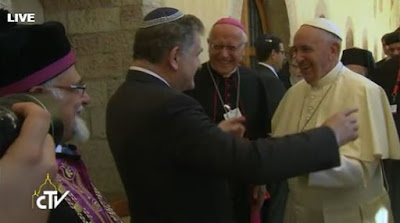 It’s not like they saw each other at the Vatican a week ago!


On 13 September 2016, Shimon Peres had a massive stroke, was admitted to the hospital, and was put into a medically induced coma.  As luck would have it, news of this event spread quickly to the Vatican where lo and behold Francis’ best buddy from Argentina happened to have stopped by for a visit.  Francis wasted little time in hastily organizing an interreligious prayer session with Rabbi Skorka “for strength for the [Peres] family and for a full recovery.”  How do we know this?  We know it because after the conclusion of the interreligious prayer session, Francis sat down and composed a letter to Shimon Peres informing him of what he had just done.  Peres’ office further told the Israeli press that Francis prayed, “a special prayer for Peres along with Rabbi Abraham Skorka of Argentina. They prayed together and asked to convey their warm well-wishes and prayers for a speedy and full recovery.”  Francis had last seen Shimon Peres when he dropped in for a visit in May 2016.  On an earlier visit in September 2014, Peres proposed to Francis that he head up a interfaith interreliggious organization, a United Nations of Religion “to combat terrorists who kill in the name of faith.” If this comes to fruition get ready for a lot more illegal immigrants in Europe and Francis giving out spiritual hugs in the name of combating terrorism. 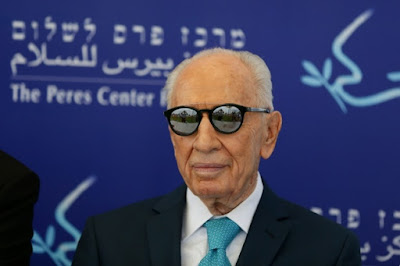 Shimon Peres, the Nobel Peace Prize winning ex-President of Israel and
terrorist mastermind who Francis and Skorka were praying for.


Who is Shimon Peres?  He was born in Wiszniew, Poland on 2 August 1923 as Szymon Perski to a Haredi family.  At the age of eleven his family joined his father in Palestine (under British Mandate) whom had immigrated there two years earlier.  He is a militant hard-liner Zionist who believes in using violence and terrorism to accomplish his political goals which often entail using this same terrorism to influence the Western governments of the world into supporting Israel’s long-term strategic goals.  Peres has served as :

Before the creation of Israel, Peres:  founded Kibbutz Alumot, later moved to and served as Secretary of HaNoar HaOved VeHaLomed a socialist-Zionist kibbutz, returned to Kibbutz Alumot where he served also as Secretary,  scouted off-limits areas of Palestine for the upcoming war, was a member of Haganah—a Zionist paramilitary terrorist organization where he was in charge of purchasing arms for them in their war of occupying Palestine and the creation of Israel, and served as one of the Mapai political party’s delegates to the Zionist Congress in Basel in 1946.

Peres who was the secretary general of the defense ministry in 1954 was responsible for the Lavon Affair.  The Lavon Affair was an Israeli convert operation in which Egyptian Jews supported by Israel’s intelligence service planted bombs in Egyptian, American, and British-owned civilian targets, such as cinemas, libraries and American educational centers.  These crimes were  false-flag attacks as they were blamed on the Moslem Brotherhood and Communists.  Besides the Lavon Affair, Peres was also instrumental in planning the 1954 Suez War (an invasion of Egypt by Israel).  He was an early supporter of the illegal West Bank settlements, and was the architect of Israel’s nuclear program which has been used by Israeli leaders to threaten the world with nuclear blackmail (the Sampson Option).  All indications lead one to strongly suspect that Shimon Peres also played an important role in the attacks on September 11th, 2001.   Laughably, this terrorist received the Nobel Peace Prize in 1994.

Now that you know who Peres is, remember Francis was praying with a Talmudic-Jewish rabbi for Peres’ family and Peres’ full recovery in the Vatican.  Never in their past meetings has Francis tried to convert Peres to the Catholic Faith nor has he chastised him for being a terrorist.  As usual Francis shows no regard for anyone’s soul.  Francis seems to genuinely like the old terrorist because he shares the same long-term goals as Peres.  After all, it was under the invitation of Henrique Cymerman and Shimon Peres which Francis visited Israel in 2014.  See our past posts, linked below, which detail some of the projects Francis and Shimon Peres have collaborated on. 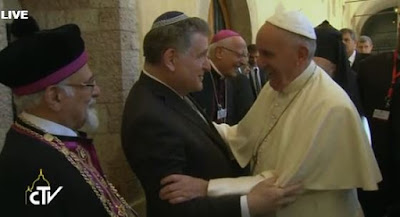 Francis was so very happy to push the Noahide new world order agenda with Skorka in Assisi!
Posted by hereisjorgebergoglio at 9:48 PM