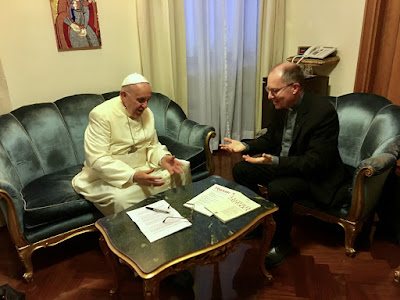 
If there is one thing you can say about Francis, it is that he never shuts his mouth.  Give him a microphone and off he goes.  When he sees a reporter, he shares his inner most thoughts no matter how banal or anti-Catholic they are.  Francis recently had another interview with La Civiltà Cattolica.  This interview was conducted by Ulf Jonsson, who was assisted by Antonio Spadaro.  Some of the topics discussed in this latest talk are:

A small sample of the nonsense is below.  See if you can make any sense of this rubbish!

For those who want to torment themselves and read the full interview click below: 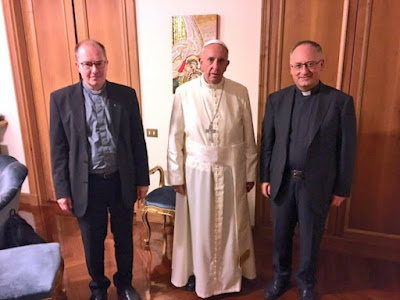 Ulf Jonsson, Francis, and Antonio Spadaro on Francis’ floor in the Vatican hotel.
Posted by hereisjorgebergoglio at 1:11 PM