‘It’s not impossible that I will go down in history as the one who split the Catholic Church.’ 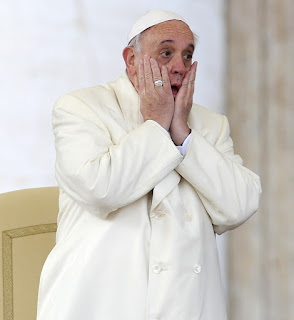 The full quote from a recent Der Spiegel article, Kritik an Franziskus "Der Papst kocht" by Walter Mayr, reads, “In his innermost circle, Francis is said to have once self-critically articulated himself thus: ‘It’s not impossible that I will go down in history as the one who split the Catholic Church.'” (translation from NovusOrdoWire — Francis: “I may go down in history as the one who split the Church”!) The remainder of the brief article mentions the reason for this is that Francis is undermining key doctrines of the Church and as a result is loosing support among the church hierarchy.  Francis doesn’t like this one bit nor does he appreciate that the little support he has is hollow and is said to be ‘steaming’.  It could be the reason be that St. Januarius’ blood
failed to liquify was that the human volcano known as Francis is getting ready to blow and we will see the wrath of “a man sick with power”.  St. Francis of Assisi before he died warned of a “Destroyer” who will cause “great Schisms” in a prophecy.  Much of what he prophesied (see below) rings true to Francis.  Could it be?  We hope not, instead may God help Francis discover and learn to love the Faith.

The Saint Prophecies great Schisms and Tribulations in the Church

A short time be the holy Father’s death, he called together his Children and warned them of the coming troubles, saying:

“Act bravely, my Brethren; take courage, and trust in the Lord. The time is fast approaching in which there will be great trials and afflictions; perplexities and dissensions, both spiritual and temporal, will abound; the charity of many will grow cold, and the malice of the wicked will increase.

The devils will have unusual power, the immaculate purity of our Order, and of others, will be so much obscured that there will be very few Christians who will obey the true Sovereign Pontiff and the Roman Church with loyal hearts and perfect charity. At the time of this tribulation a man, not canonically elected, will be raised to the Pontificate, who, by his cunning, will endeavour to draw many into error and death.

Then scandals will be multiplied, our Order will be divided, and many others will be entirely destroyed, because they will consent to error instead of opposing it.

There will be such diversity of opinions and schisms among the people, the religious and the clergy, that, except those days were shortened, according to the words of the Gospel, even the elect would be led into error, were they not specially guided, amid such great confusion, by the immense mercy of God.

Then our Rule and manner of life will be violently opposed by some, and terrible trials will come upon us. Those who are found faithful will receive the crown of life; but woe to those who, trusting solely in their Order, shall fall into tepidity, for they will not be able to support the temptations permitted for the proving of the elect.

Those who preserve their fervour and adhere to virtue with love and zeal for the truth, will suffer injuries and, persecutions as rebels and schismatics; for their persecutors, urged on by the evil spirits, will say they are rendering a great service to God by destroying such pestilent men from the face of the earth. But the Lord will be the refuge of the afflicted, and will save all who trust in Him. And in order to be like their Head [Jesus Christ], these, the elect, will act with confidence, and by their death will purchase for themselves eternal life; choosing to obey God rather than man, they will fear nothing, and they will prefer to perish [physically] rather than consent to falsehood and perfidy.

Some preachers will keep silence about the truth, and others will trample it under foot and deny it. Sanctity of life will be held in derision even by those who outwardly profess it, for in those days Jesus Christ will send them not a true Pastor, but a destroyer.”

source: Works of the Seraphic Father St. Francis Of Assisi, pp. 248-250.
Posted by hereisjorgebergoglio at 9:52 AM