Bp. Fellay, “Francis is all mixed up”

excerpt from the Conference given by Bp. Fellay
8 October 2016 — Port-Marly, France

Moreover, with what the pope is doing, there have been protests by cardinals on moral questions, on the question of marriage, on the question of communion for divorced-and-remarried persons. A certain number of them have clearly and openly said that they refuse, declaring: “No, that will not be done.” Then there are the African bishops, who have clearly said that there is no question of giving communion to divorced-and-remarried persons. This is a reaction that is saying no to the supreme authority. Which we have been doing for fifty years. This is becoming extremely interesting. We are no longer the only ones.

Then some people say: “Careful! Careful! If you make an agreement, afterwards they will silence you.” But that is passé! That’s over! There are others who are talking. We are no longer the only ones. We no longer have a monopoly on protests. They are not very numerous, but this number is increasing. And then, from time to time, I receive letters. Like this one: I will read it to you in English because it is an image: “Stick to your guns. Always stick to your guns.” This means: Keep your hands on your revolvers. Hold them firmly. In other words: “Defend yourselves. Always. And refuse to compromise in these matters that do not really pertain to the substance of the faith: religious liberty, ecumenism, dialogue with non-Christian religions. There are many of us in the hierarchy who think and believe in what you are doing about these questions.” It is a bishop who wrote that to me. He does not write “I”, he writes that there are many of “us”. He wrote other things too that I dare not read to you, they are so laudatory, but here is the gist: “We need voices that tell us the limits of our freedom in those areas.” He says that the Church, which teaches the truth, is now lost in the gray areas, in vagueness. “Come to our aid.” And also: “Do not let go of anything, continue like this, we need it!” This is new! There was nothing like this before! The bishops used to tell us: obviously there are problems, but at the end of the day…. And here they are telling us: “Resist, we need it!” Actually they do not speak too loud because they know very well that if they do, they will be cutting off their own heads.

But they are working silently, they are working to reestablish the old Mass, like one archbishop who told me: “I have a generation of priests that is lost. You can’t do anything with them. What do I do, then? I take care of the young ones.” And he gave me two criteria: priestly formation in theology is the Summa of Saint Thomas, and in spirituality, in liturgy, it is the old Mass. I am not telling you their names because we do not want to burn out these prelates, but there are several of them. I discover some, just like that, by surprise, and there are a certain number of them! And these are young bishops! And some of them were appointed by Pope Francis! He is not just appointing bad ones! He is all mixed up, like his whole attitude, which has also increased the general confusion. But it is extremely interesting to see that there is this movement, and I am certain that it will no longer stop. Why? Because these bishops see where the truth is, and they will not give in. They are annoyed, they are cornered, because they are in the system, but they will no longer give in. Just like these priests who have discovered the old Mass, they will do all that they can, they are annoyed, cornered, but they will keep it. These are skirmishes that have been won. 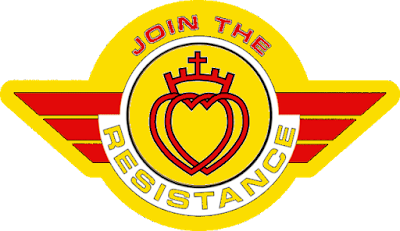 The new FSSPX logo?
Posted by hereisjorgebergoglio at 1:52 AM