Before reading the preface which Francis wrote keep in mind just six of the recent clerical sex abuses of children involving Francis: 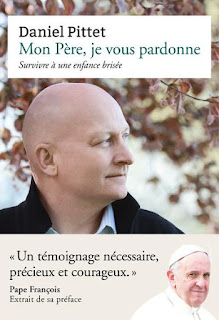 
For those who have been victims of a pedophile it is difficult to talk about what they have been through and describe the trauma that still persist after many years. For this reason, Daniel Pittet’s testimony is necessary, treasured and courageous.

I met Daniel at the Vatican in 2015, during the Year of the consecrated life. He wanted to promote on a large scale a book called “To love is to give everything”, which collected the testimonies of religious men and women, priests and consecrated persons. I could not have imagined that this enthusiastic and passionate Christian man had been the victim of abuse by a priest. Yet this is what he told me, and his suffering struck me very much. I saw once again the tremendous damage caused by sexual abuse and the long and painful journey that awaits the victims.

I am happy that others can read his testimony today and discover how far evil can enter the heart of a servant of the Church.

How can a priest at the service of Christ and his Church cause so much harm? How can someone who devoted their life to lead children to God, end up instead to devour them in what I called “a diabolical sacrifice” that destroys both the victim and the life of the Church? Some of the victims have been driven to suicide.  These deaths weigh on my heart, on my conscience and that of the whole Church. To their families, I offer my feelings of love and pain and humbly, I ask forgiveness.

It is an absolute monstrosity, a horrible sin, radically against everything that Christ has taught us. Jesus uses very harsh words against those who harm children, “If anyone causes one of these little ones--those who believe in me--to stumble, it would be better for them to have a large millstone hung around their neck and to be drowned in the depths of the sea” (Matthew 18: 6).

As I recalled in the Apostolic Letter of June 4, 2016, Our Church must take care and protect with special love the weak and the helpless “as a loving mother”. We have stated that it is our duty to be extremely strict with the priests who betray their mission, and with their hierarchy, bishops or cardinals, who might protect them, as has happened in the past.

In adversity, Daniel Pittet also met another face of the Church, and this allowed him to not lose hope in men and in God. He also tells us of the power of prayer that he has never abandoned, and that has comforted him in the darkest hours.

He chose to meet his tormentor forty-four years later, to look into the eyes of the man who has hurt him in the depths of his soul. He lended him his hand. The wounded child is now a standing man, fragile but standing. I’m very impressed by his words: “Many people fail to understand the fact that I do not hate him. I have forgiven him and I built my life on that forgiveness.”

I thank Daniel, because testimony like his break down the wall of silence that covered scandals and suffering, shedding light on a terrible dark area in the life of the Church. They open the way to a just mending and to the grace of reconciliation, helping pedophiles to become aware of the terrible consequences of their actions.

I pray for Daniel and for all those who, like him, were wounded in their innocence, may God lift them and heal them, and give us all his forgiveness and mercy. 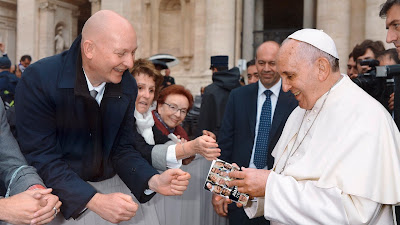 Daniel Pittet gives Francis a copy of his book,  ‘Aimer c'est tout donner’ (To love is to give everything), at the 16 September 2015 general audience.  Mr. Pittet and 15 volunteers passed out 50,000 copies of this work that day.
Posted by hereisjorgebergoglio at 1:28 PM