another interview with Francis 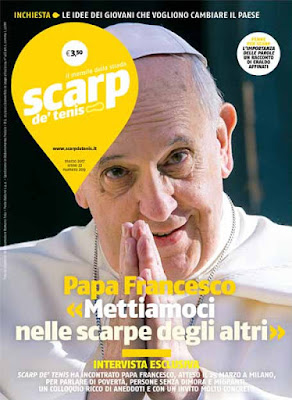 One hopes, or at least we at Call Me Jorge... hope that Francis gives up all forms of public speaking for Lent — homilies, interviews, off the cuff remarks, speeches, addresses, etc...  This will likely stay simply a wish.  Just before Lent began, Francis found time to fit in one more interview which was not about the Faith, nor about Lent, or Our Lord’s Passion but about his ‘humble’ self, the homeless, and the plight of the Moslem invaders living in Europe. The interview was conducted on 16 February 2017 in the Vatican by Stefano Lampertico the director of Scarp de’ tenis (Tennis Shoes), the magazine which some homeless sell in Milan, Italy.  Scarp de’ tenis is a monthly magazine conceived of and supported by Caritas Ambrosiana and Caritas Italiana in the diocese of Milan.

Get the latest interview of Francis in Milan from people dressed in red bibs. 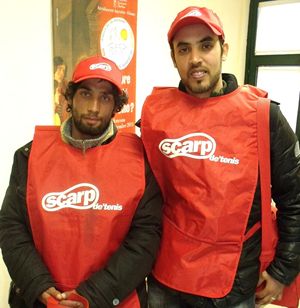 (Circa 2012) Hassad a homeless Moroccan and Robert a gypsy from Romania/Hungary sell Scarp de’ Tenis in Milan, Italy.  This is back when illegal immigrants had jobs in Italy and before the State put them on the dole.  Hopefully by now Hassad and Robert have assimilated to life in Italy or better yet, returned home. 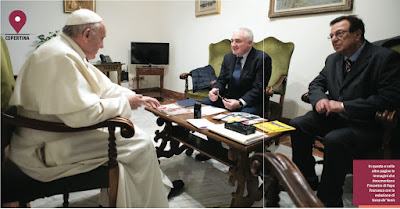 
The interview Francis gave was titled “Mettiamoci Nelle Scarpe Degli Altri” (Let’s place ourselves in the shoes of others).  It consists of ten questions posed to Francis and his answers.  It is filled with the usual gospel according to Francis the ‘humble’ which consists of a claptrap of naturalistic and modernist garbage.  Among the lowlights:

We reiterate what we wrote above, Francis doesn’t mention saving souls or anything really pertaining to the spiritual element of Christianity.  He only touches corporal works of mercy and he doesn’t do a good job of even covering that properly from a Catholic perspective.  Examining one of Francis’ answers we see how idiotic it is.  Francis tells a story of children who befriend homeless people and bring them into the home to feed them when their parents are out.  The sense one gets when reading Francis’ answer is that these children are wiser than their parents.  This is a dangerous answer which Francis gives for several reasons.  Who are these homeless?  Criminals?  People who should be in mental institutions?  Child rapists?  Drug addicts?  Moslem invaders?  People down on their luck?  The answer to this is important but not to Francis.  Don’t parents have an obligation to protect and raise their children, often making decisions for them which are for their good even though they may not like them?  Instead, Francis sells his modernist program of trash and destruction on emotion.  The interview is filled with all sorts of prescriptions which only make one more sick and the disease worse than before.  How much longer until everyone sees that Francis is the emperor with no clothes?

The last time Scarp de’ tenis printed an interview with Francis it was conducted by the Dutch homeless newspaper, Straatnieuws. and published in several other magazines also sold by the homeless.  Francis said that he wanted “a world without poor” and his childhood dream was to become, “a butcher”.  Christ told us “the poor you have always with you” (Matthew 26,11) and Francis is certainly making mincemeat out of Catholic Tradition.

Posted by hereisjorgebergoglio at 12:43 AM