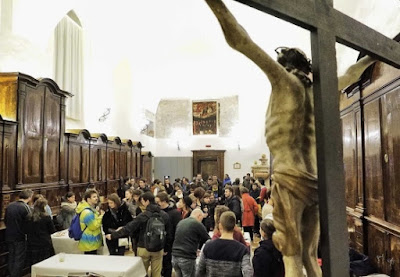 Mixing the Sacred and the Profane?


Everyone has heard about the new crop of priests coming through the ranks.  Those that are conservative in their tastes of ‘fashion’ as Francis would say.  Well, this post isn’t about them, instead it’s about their brethren clowns, two in particular — don Mauro Leonardelli and don Ronaldo Covi.  On the last Sunday evening of the month after the 7:00 PM Novus Ordo mess, the two clowns turn the sacristy of the Cathedral of Saint Vigilius in Trent into a pub.  Don Mauro (34 years old) and don Ronaldo (37) are in charge of Campus Ministry at the local university (Pastorale Universitaria Torino) and thought this would be a good idea to bring people to the Novus Ordo religion.  Don Mauro tells it best,


“The goal is to create a moment of contact between students that goes beyond traditional events, at 7 o’clock we celebrate the Mass which is open to everyone, but with a specific dedication to the university and then [afterwards] we move students into the sacristy where the entrance is free.”

Homemade hors d'œuvres and snacks are brought by the participants and a professional bartender whips up an alcoholic drink of the night.  For February’s Sunday the theme was winter drink — New Moskow Mules consisting of vodka, ginger beer, cranberry juice, and various trimmings were served.  Hundreds of students showed up and mixed in the sacristy.  One thing was missing from this unique pub — music — as don Mauro explains,


“[Music is] missing on purpose because this moment is one to be aware of. Those who come may invite one or more friends, the guys talk to each other and could not do so if there was the music.”

What do the students think of this sacrilegious pub?


“It’s perfect, because it would not be the same thing if you held it at the oratory or at the priest’s house.  We attended mass, and with only a few steps and we stood together laughing and joking.”


“It’s beautiful also because on Sundays many of the places that we frequent on weekdays are closed.  Here we can talk and maybe even find company for a pizza.”

When confronted about his sacrilegious behavior don Mauro doesn’t back down,


“You may not like it, but if we want to attract young people, to revitalize Pastorale Universitaria and give way to a basic evangelization process, we need to change. The mode of action in place, has proven not to be effective.”

And there you have it folks, taking the Novus Ordo to it’s logical conclusion.  When you don’t have the Faith and your religion stands for nothing — the sacristy becomes a pub.  It’s no wonder that Islam is spreading across Europe.

Realted:
Posted by hereisjorgebergoglio at 4:34 PM