The “purification of memory” — Martin Luther

A note from Call Me Jorge..., the term “purification of memory” was to our knowledge coined by John Paul II.  This concept is a central key to understanding his reign which consisted of traveling all over the world and asking the Church’s enemies for forgiveness.  The document, MEMORY AND RECONCILIATION: THE CHURCH AND THE FAULTS OF THE PAST (December 1999) explains it thus,


The purification of memory is thus “an act of courage and humility in recognizing the wrongs done by those who have borne or bear the name of Christian.” It is based on the conviction that because of “the bond which unites us to one another in the Mystical Body, all of us, though not personally responsible and without encroaching on the judgement of God, who alone knows every heart, bear the burden of the errors and faults of those who have gone before us.”


There is also another aspect to the “purification of memory” as written of by Alberto Carosa for The Catholic World Report, (underlines are ours for emphasis)


The papacy of John Paul II also signaled a new re-visiting of memory and tradition, which paved the way for reconciliation and peace-building, Cardinal Turkson explained, pointing specifically to the historical cases of Galileo and the Inquisition. In these cases John Paul spoke about “purifying memory”; we need not only to preserve history and build up memory, but there are times when particular incidents need to be revisited, re-interpreted, and sometimes even corrected, including asking for pardon when necessary.


We at Call Me Jorge... are guessing that Francis and the Vatican will soon purge the history books of the fact that Martin Luther is and was a heresiarch by throwing this inconvenient truth down the memory-hole.  After all, Francis has said Luther “made a medicine for the Church” and that Luther, “was a reformer.” Not only that, he told a private audience of Lutheran pilgrims, “that the Church’s greatest reformers are the saints” while sharing the stage of the Paul VI Audience Hall with a statue of Martin Luther.  Finally, this year the Vatican will commemorate the 500th anniversary of Luther’s Revolt by issuing a stamp in its honor.  And now onto the speech Francis gave to the participants at the conference promoted by the Pontifical Committee for Historical Sciences, entitled “Luther: 500 Years Later: A rereading of the Lutheran Reformation in its historic ecclesial context”. 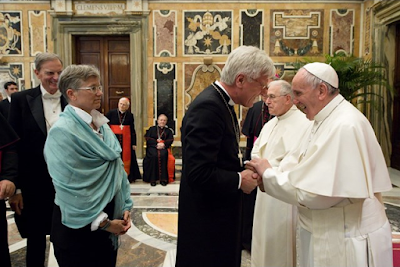 FRANCIS TO PARTICIPANTS IN THE MEETING PROMOTED BY
THE PONTIFICAL COMMITTEE FOR HISTORICAL SCIENCES:
"LUTHER: 500 YEARS LATER:
A rereading of the Lutheran Reformation in its historic ecclesial context"
Clementine Hall
Friday, 31 March 2017

I am pleased to greet all of you and to offer you a warm welcome. I thank Father Bernard Ardura for his introduction, which summarizes the purpose of your meeting on Luther and his reform.

I confess that my first response to this praiseworthy initiative of the Pontifical Committee for Historical Sciences was one of gratitude to God, together with a certain surprise, since not long ago a meeting like this would have been unthinkable. Catholics and Lutherans together, discussing Luther, at a meeting organized by an Office of the Holy See: truly we are experiencing the results of the working of the Holy Spirit, who overcomes every obstacle and turns conflicts into occasions for growth in communion. From Conflict to Communion is precisely the title of the document of the Lutheran-Roman Catholic Commission prepared for our joint commemoration of the fifth centenary of the beginning of Luther’s reform.

I am particularly happy to know that this commemoration has offered scholars from various institutions an occasion to study those events together. Serious research into the figure of Luther and his critique of the Church of his time and the papacy certainly contributes to overcoming the atmosphere of mutual distrust and rivalry that for all too long marked relations between Catholics and Protestants. An attentive and rigorous study, free of prejudice and polemics, enables the churches, now in dialogue, to discern and receive all that was positive and legitimate in the Reformation, while distancing themselves from errors, extremes and failures, and acknowledging the sins that led to the division.

All of us are well aware that the past cannot be changed. Yet today, after fifty years of ecumenical dialogue between Catholics and Protestants, it is possible to engage in a purification of memory. This is not to undertake an impracticable correction of all that happened five hundred years ago, but rather “to tell that history differently” (LUTHERAN-ROMAN CATHOLIC COMMISSION ON UNITY, From Conflict to Communion, 17 June 2013, 16), free of any lingering trace of the resentment over past injuries that has distorted our view of one another. Today, as Christians, all of us are called to put behind us all prejudice towards the faith that others profess with a different emphasis or language, to offer one another forgiveness for the sin committed by those who have gone before us, and together to implore from God the gift of reconciliation and unity.

I assure you of my prayers for your important historical research and I invoke upon all of you the blessing of God, who is almighty and rich in mercy. And I ask you, please, to pray for me. Thank you.

Posted by hereisjorgebergoglio at 6:35 AM