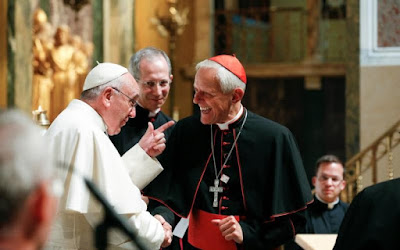 Below is a transcript of the answer Donald Wuerl gave in a recent interview with Gerard O’Connell to the question of what he thought Francis’ accomplishments in his first four years were.  Notice that Wuerl says Francis great contribution has been reconnecting the church to the (Talmudic) energy of Vatican II and that Francis has refocused the church back onto this (Talmudic) path.  Both Wuerl and Francis are modernists and rabbinical traditionalists.


(Underlines are Call Me Jorge...’s for emphasis.)

“I think his great contribution to date has been the reconnecting of the church with the energy of the Second Vatican Council, the energy coming out of that council. I was a student, studying theology when that council was going on and we were all caught up in the excitement of aggiornamento—renewal.
I think what happened next was that following the council there were some exaggerations. Theologically there was the hermeneutic of discontinuity; liturgically there were all kinds of experimentation. And in a way what got lost was the council’s call for us to return our focus to the primacy of love as the engine driving the church, her teaching and her outreach.
John Paul II was the great refocusing moment in the life of the church to get us back on track and say no to the exaggerations and discontinuity. Pope Benedict put the nail in the coffin on the discontinuity.
Now comes Pope Francis who’s saying, “Why don’t we pick up where we left off: collegiality, synodality.” The synodality that Paul VI initiated has flowered under Francis. Those two synods on the family were unlike any of the other synods prior to them because they actually invited the bishops into the process in a transparent, open way.
Then came the emphasis in “Amoris Laetitia.” It told us that we have to get back, as the council said, to a moral theology that rests on scripture and Jesus’ command to love and to the virtues that are the signs of a moral life, not the rigid following of the letter of the law.
So, when I look back over these four years, I see that Francis has accomplished all this refocusing, even though we have a long, long way to go to begin to change the direction of an institution as big as the Catholic Church and to get it focused back again on the path that I believe the council set out on. I think what he has done is already a huge accomplishment.”

Posted by hereisjorgebergoglio at 12:24 PM