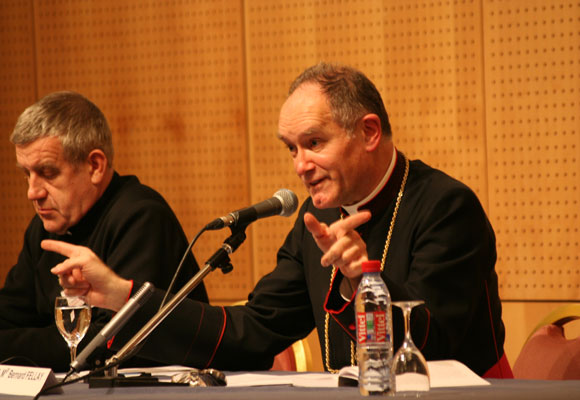 Which way are they going?


From a very practical perspective, the Society of Saint Pius X has been trying for many years to acquire a chapel in Rome to replace the one that it owns, which is unfortunately too small. If this chapel, or rather this church, had adjoining buildings, it could provide lodgings for priests who are passing through. But there was never any discussion about relocating the General House.
For these doctrinal and practical reasons, there have been plans for a purchase in Rome, there are some now and there will be others, as long as a firm acquisition has not been finalized. On the other hand, to respond to the “revelations” in the press, there is no plan to purchase a building complex at Santa Maria Immacolata all’Esquilino, as Matteo Matzuzzi writes. Neither Bp. Fellay nor Bp. de Galarreta nor Fr. Nély stayed at the Casa Santa Marta; they were not even in Rome from January 17 to 20. Of course Fr. Nély must travel frequently in Italy, because he is serving as interim replacement of the District Superior, but from January 17 to 20 he was in Menzingen. Not having the gift of bilocation, and most importantly not being Econome General, he is not in charge of finalizing any plan to purchase property. As for the Superior General of the Sisters of the Society, she visited the community of nuns in Albano in February, where she took part in no real estate negotiations.
Moreover on February 27 the Vaticanist for La Stampa, Andrea Tornielli, who has information from the best Roman sources, wrote: “Various rumors have spread in recent days about the possibility that the Society may buy a building with an adjacent church, in order to transfer its headquarters to Rome, and they spoke about the complex of Santa Maria Immacolata all’Esquilino, not far from the Lateran.
“The complex is made up of a neo-Gothic church built in the early 20th century for the Brothers of Charity and a building that has already been used in the past as an elementary and secondary school, which now belongs to a religious order. It was said that Francis and the Ecclesia Dei Commission facilitated the purchase. In fact, this was not the case: The Ecclesia Dei Commission was in no way involved, nor was the Vicariate of Rome.” Duly noted!

Posted by hereisjorgebergoglio at 6:31 AM