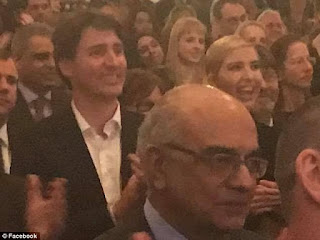 Yael Kushner (aka Ivanka Trump) was the special guest of Canadian Prime Minister, Justin Trudeau, at the Broadway musical, “Come From Away” on Wednesday night at the Gerald Schoenfeld Theatre in New York City.  She sat in Row F next to the Canadian clown.  The idea for the musical was conceived of by Michael Rubinoff, a lawyer and theater producer, who then partnered with Irene Sankoff and David Hein, known for their 2009 hit musical “My Mother's Lesbian Jewish Wiccan Wedding”.   The premise of “Come From Away” is on 9/11 the United States of America’s federal government shut down all airspace in the country which resulted in a partnership with Canada’s government called Operation Yellow Ribbon.  Under this operation, all USA bound international flights landed in Canada.  The musical focuses on the town of Gander in Newfoundland which had 38 planes with 6,579 passengers diverted to their airport.  Wikipedia has this to say about the musical, (underlines ours for emphasis):


To alleviate rising fear and mounting tensions ("On The Edge"), the passengers are invited to be initiated as honorary Newfoundlanders at the local bar ("Heave Away / Screech In"). The "islanders" in Gander and the surrounding towns open up their homes to the "plane people", regardless of their guests' race, nationality or sexual orientation. The travelers are initially taken aback by their hosts' uncommon hospitality, but they slowly let their guards down and begin to bond with the quirky townsfolk.
The gravity of the attacks nevertheless continues to set in as US airspace is eventually reopened. One pilot comments on how her once optimistic view of the world has suddenly changed ("Me and the Sky"), while the mother of a firefighter learns that her son lost his life during the rescue efforts in New York City. One pair of passengers starts to develop a romance ("Stop the World"), while another pair sees their long-term relationship fall apart under the stress of the event.
As the passengers and crew fly away to their homes, they joyously exchange stories of the immense kindness and generosity that was shown to them by the Newfoundland strangers in their time of need ("Somewhere in the Middle of Nowhere"), but not before a Muslim traveler, faced with increasing prejudice from his fellow passengers, undergoes a humiliating strip search prior to boarding. The townsfolk return to normal life, but comment on how empty their town now seems and how different the world now feels ("Something's Missing").


How is this clown a prime minister? 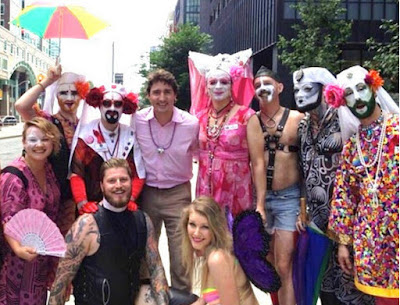 Mocking God and the Catholic Faith is just fun and games to Justin!


Mr. Trudeau a former substitute teacher and the current prime minster of Canada is a socialist whom supports open borders, homosexual marriage, and chabad.  Here’s what he wrote about family friend, Fidel Castro when he died:


It is with deep sorrow that I learned today of the death of Cuba’s longest serving President.
Fidel Castro was a larger than life leader who served his people for almost half a century. A legendary revolutionary and orator, Mr. Castro made significant improvements to the education and healthcare of his island nation.
While a controversial figure, both Mr. Castro’s supporters and detractors recognized his tremendous dedication and love for the Cuban people who had a deep and lasting affection for “el Comandante”.
I know my father was very proud to call him a friend and I had the opportunity to meet Fidel when my father passed away. It was also a real honour to meet his three sons and his brother President Raúl Castro during my recent visit to Cuba.
On behalf of all Canadians, Sophie and I offer our deepest condolences to the family, friends and many, many supporters of Mr. Castro. We join the people of Cuba today in mourning the loss of this remarkable leader.

Trudeau’s message to the Chabad-Lubavitchers

Recall that Yael Kushner and her husband went to the tomb of the Lubavitcher Rebbe, Menachem Mendel Schneerson, to perform a Hasidic ritual to their totem.  You can read about it here, Ivanka Trump Visiting Ohel Of Lubavitcher Rebbe.

Yael celebrated the communist holiday, International
Women’s Day, by posting this to her social medias. 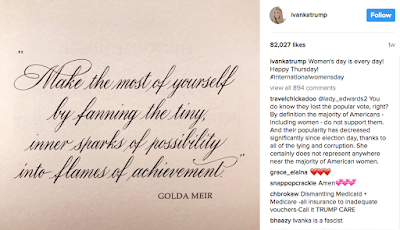 So what else does Yael Kushner have in common with Trudeau besides Chabad and communism?  She and her husband Jared are supporters of the LGBTQ perversions.   So much so in fact that the two put the kibosh on the executive order her father, Donald Trump was going to sign which would have rolled back all the special rights extended to LGBT peoples under the Obama administration and expand legal exemptions based on religious beliefs against these lifestyles.   We can hear you say but the Jews are against homosexuality and everything associated with it!  Are they?  The Haaretz article, Homosexuality Is Part of Jewish Tradition reads,

The Jews did not strictly preserve “the heterosexual principle.” Intimate relations between men existed in Jewish communities and apparently were also common. Historian Yaron Ben-Naeh has shown in his research that despite the explicit biblical prohibition, in Jewish communities in the Ottoman Empire same-sex relations were rather common. This is indicated by dozens of sources. Moreover, until the modern era, grown men who had a need for the favors of youths did not have a negative image in Jewish society.

Thanks to Maurice Pinay, we have what the Talmud says about homosexuality.  There are loopholes for both committing “unwittingly” sodomy and “unwittingly” bestiality. 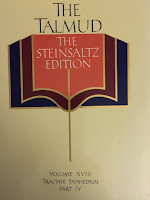 Babylonian Talmud Sanhedrin 54b Steinsaltz edition.
This is the version chabad sect uses which Yael Kushner
is a member of and Justin Trudeau is a supporter of.


Yael Kushner’s role at the White House is wearing a carnival mask, one of putting on airs in the manner of Jackie Kennedy-type, in order to conceal and misdirect from the grotesque anti-christian monstrosity of Chabad which is running the place.  Remember on Purim, “a rabbinic festival of revenge derived from the Book of Esther and then further embroidered and extended by authoritative Talmudic and Kabbalistic traditions which are observed in Orthodox Judaism as a sacred obligation”, she used her children as props to make it appear as if this deranged revenge festival was all about family.

So what’s this all have to do with 9/11?  Well, the only accepted version of the event is one read through Talmudic and Kaballahistic lenses. (See, Cui bono? or 9/11 cui bono? for the unofficial account.)  The musical “Come From Away” says that race, nationality, sexual perversions, and religion don’t really matter and that unless one welcomes these attitudes into their lives then they will feel empty.  The sad part is, all the Christians who will swallow these attitudes hook, line, and sinker and even propagate this garbage.  We’d go so far to call Francis a gleefully willing accomplice.  This politically correct ghetto mentality is one of the facets being pushed since 9/11 onto Christians of all stripes and Yael Kushner is this movement’s current cover girl.
Posted by hereisjorgebergoglio at 10:11 PM