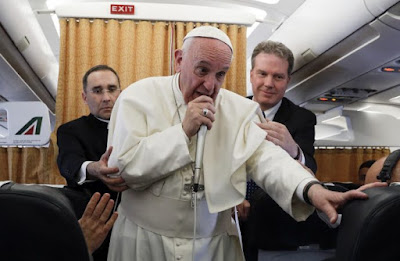 
Greg Burke (Vatican press director): Here among the journalists are those who are making a trip for the first time and those who have made almost 100.. No, more than 100, I think… And you, I don’t know if you know how many international trips you’ve made…
Francis: 18!
Greg Burke: Ah, 18, alright great. I didn’t know. Nineteen is around the corner, so also you have a good number of Papal trips now. Thanks for this moment which is always a strong moment for us and let’s start with the Italian group, Paolo Rodari. I don’t know if you want to say something first.
Francis: Yes, good evening and thanks for your work because these were 27 hours, I think, of much work. Thanks so much for what you did, thank you. And I’m at your disposal.
Greg Burke: Thank you, Holy Father.
Paolo Rodari (Repubblica): Hello. Holy Father, thank you. I wanted to ask you about your meeting yesterday with al Sisi. What did you speak about? Topics of human rights were mentioned and, in particular, that you were able to speak about the case of Giulio Regeni, and do you think the truth will be reached in that regard?
Francis: On this I will give a general response, to then reach the particular. Generally when I am with a head of state in private dialogue, that remains private, unless, by agreement, we say ‘let’s say on this point, we’ll make it public.’ I had four private dialogues here with the Grand Imam of al-Azhar, with al Sisi, with Patriarch Tawadros and with Patriarch Ibrahim and I believe that if it is private, for respect one must maintain privacy… it is confidential… but later there is the question on Regeni. I am concerned, from the Holy See I have moved on that topic because the parents also asked me to. The Holy See has moved. I will not say how or where, but we have moved.
Greg Burke: Dario Menor Torres, from El Correo Espanol.

Dario Menor (El Correo Espanol): Thank you, Holiness! You said yesterday that peace, prosperity and development deserve every sacrifice and later you underscored the importance of the inalienable rights of man. Does this mean a support for the Egyptian government, a recognition of its role in the Middle East, and how it tries to defend Christians despite insufficient democratic guarantees from this government?
Francis: Could you repeat… what does what mean? I didn’t hear…
Dario Menor: If these words that you said on the importance of peace, of prosperity and development, saying that they deserve every sacrifice, if we should interpret them as a support of the Egyptian government and how it tries to defend Christians despite insufficient democratic guarantees.
Francis: No, No… one must interpret (it) literally as values in themselves… I said that defending peace, defending the harmony of peoples, defending the equality of citizens, whichever the religion they profess may be, are values. I spoke of values! If a person who governs defends one value or defends another, it is another issue. I have made 18 [international] visits. In many of those nations, I’ve heard, ‘But the Pope, going there, gives support to that government,’ because a government always has its weaknesses or it has its political adversaries, and some say one thing or another… I don’t get mixed up (in that)... I speak about values, and every person sees, is a judge if this government, this state, that from here, that from there, carries those values forward…

Phil Pulella (Reuters): If I can I would like to speak about another topic, but I'll start with the trip. You spoke yesterday in your first speech about the danger of unilateral action, and that everyone must be builders of peace. Now you have spoken very clearly about the "third world war in pieces," but it seems that today this fear and anxiety is concentrated on what is happening in North Korea...
Francis: Yes, it's the focal point! 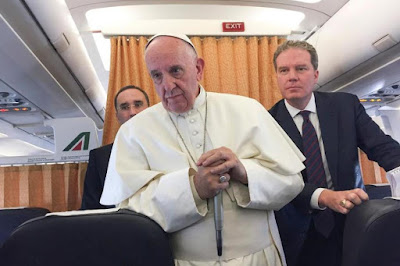 Posted by hereisjorgebergoglio at 3:12 PM