Francis’ trip to Egypt in one photo 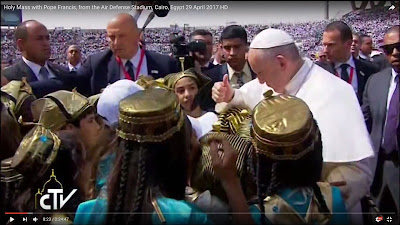 Francis ‘the humble’ ‘first Moslem’ gives the thumbs up to children dressed as pharaohs.  This was a photo-op extraordinaire.  Under extremely tight security for a North African country with the majority of the audience separated from Francis by a 15 foot fence barrier and tons of security, the children were to go over and embrace Francis but they didn't at first.  It wasn’t until he waved over the children that they remembered what had been rehearsed.   Symbolically, Francis is giving thumbs up to Pharaonic magic and the occult right before beginning his man-made Novus Ordo mess.  This symbolic theme was also contained in his logo for the Egypt trip and written about here previously.  Francis is continuing to demonstrate his ‘revolution of tenderness’ by embracing the pharaohs and helping to further de-Christianize Egypt. 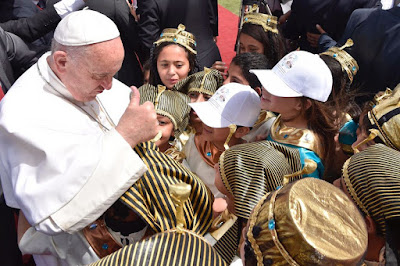 L'Osservatore Romano published this photo of the moment from another perspective.
Posted by hereisjorgebergoglio at 1:39 PM