Holocaustianity, the official religion of the Federal government of the United States of America


Watch as Trump invokes the Hasidic High Priest of the Holocaustianity — Elie Weisel — and quotes this chronic liar, “Never forget!” and “whose spirit fills this room.”  Trump believes that the Holocaust survivors, “fulfill the righteous duty to never forget, and engrave into the world’s memory the Nazi genocide of the Jewish people.”  What he leaves unexplained is that one can be a Holocaust survivor without ever having lived in a Nazi concentration camp.

Then, Trump Kabbalistically infuses his words with the magic six-million just as he did the other day when addressing the World Jewish Congress.  Next up Trump’s chutzpah is front is center as he throws out this condemnation, “Those who deny the holocaust are an accomplice to this horrible evil.”  Trump continues by trumpeting the Chasidic lines of, “We will never be silent!” and “Denying the holocaust is only one form of dangerous anti-semitism!”

The best part of his speech is when he mentions one of the Holocaust’s living patron saints, Gerda Klein.  See good old, Gerda Weissmann Klein is a survivor of German concentration camps and an Academy Award winner but she has some problems with her memory.  She goes around telling her stories but the details are always changing.  She and her family were forced to live in the basement of their family home because “Aryans” who lived in basement decided to now live upstairs.  This arrangement either went on for a year and a half or three years depending on the version of the fantasy being told.  At the age of fifteen (in other versions Gerta is nine) she was kidnapped from Poland and taken to Germany where she was sold as a slave at the open slave market.  She was sought after because she spoke German and the Nazis were in need of Polish Jews who spoke German.  Then there is her heart tugging story about the slightly bruised raspberry her friend gave her. 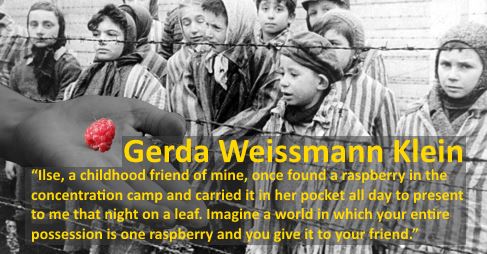 Gerda says she went on a 350 mile death march or was it a 500 mile death march?  Well in both versions she ends up with white hair and weighing 68 lbs. when the death march is finished wearing rags and not having taken a bath in three years.  Gerda was liberated by her future husband, a US soldier, from a bicycle factory or ice factory (depending on which version of the story Gerda is telling), with a time bomb strapped to the door which failed to go off because it was raining outside.  What luck!  Her future husband “looked like a God to her” and whom she told in German, “I'm a Jew, you know” and he responded “So am I.”  She made it through this grueling death march and others because of ski boots her father made for her before he was shipped off to die in another concentration camp.  She also hide family photos in these magical ski boots.  Truly a miraculous tale in all of its versions.

Trump extols survivors like Gerta as everything that is good and beautiful in the world.


“Each survivor here today is a beacon of light, and it only takes one light to illuminate even the darkest space. Just like it takes only one truth to crush a thousand lies and one hero to change the course of history. We know that in the end, good will triumph over evil, and that as long as we refuse to close our eyes or to silence our voices, we know that justice will ultimately prevail.”


This light obviously is the Jewish people and the truth is the Holocaust.  The Donald concludes this solemn and sacred gathering to the eternal monument that is Israel with “...and (today) we pledge never again!”


Straight from the con-artist’s mouth.


The White House
Office of the Press Secretary
For Immediate Release