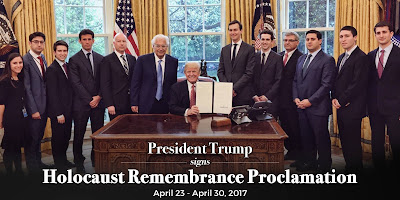 DAYS OF REMEMBRANCE OF VICTIMS OF THE HOLOCAUST, 2017
-----------------------------------
BY THE PRESIDENT OF THE UNITED STATES OF AMERICA
A PROCLAMATION
On Yom HaShoah the day of Holocaust Remembrance and during this Week of Remembrance, we honor the victims of the Holocaust and Nazi persecution.
​The Holocaust was the state-sponsored, systematic persecution and attempted annihilation of European Jewry by the Nazi regime and its collaborators. By the end of World War II, six million Jews had been brutally slaughtered. The Nazis also targeted other groups for persecution and murder, including Roma (Gypsies), persons with mental and physical disabilities, Soviet prisoners of war, Jehovah's Witnesses, Slavs and other peoples of Europe, gays, and political opponents.
​The United States stands shoulder to shoulder with the survivors of the Holocaust, their families, and the descendants of those who were murdered. We support the Jewish diaspora and the State of Israel as we fulfill our duty to remember the victims, honor their memory and their lives, and celebrate humanity's victory over tyranny and evil. Holocaust survivors, despite scars from history's darkest days, continue to inspire us to remember the past and learn from its lessons. By sharing their experiences and wisdom, they continue to fuel our resolve to advance human rights and to combat antisemitism and other forms of hatred.
​During this week in 1945, American and Allied forces liberated the concentration camp at Dachau and other Nazi death camps, laying bare to the world the unconscionable horror of the Holocaust. We must remain vigilant against hateful ideologies and indifference. Every generation must learn and apply the lessons of the Holocaust so that such horror, atrocity, and genocide never again occur. It is our solemn obligation to reaffirm our commitment to respecting the fundamental freedoms and inherent dignity of every human being.
​Let us join together to remember and honor the victims of the Holocaust and Nazi persecution. We express our eternal gratitude to the liberators who selflessly risked their lives to save those of others, and we pledge to never be bystanders to evil.
​We must never forget.​
​NOW, THEREFORE, I, DONALD J. TRUMP, President of the United States of America, do hereby ask the people of the United States to observe the Days of Remembrance of Victims of the Holocaust, April 23 through April 30, 2017, and the solemn anniversary of the liberation of Nazi death camps, with appropriate study, prayers and commemoration, and to honor the memory of the victims of the Holocaust and Nazi persecution by internalizing the lessons of this atrocity so that it is never repeated.
​IN WITNESS WHEREOF, I have hereunto set my hand this twenty-fourth day of April, in the year two thousand seventeen, and of the Independence of the United States of America the two hundred and forty-first.
​​​​​​DONALD J. TRUMP

Wow, that looks uncannily similar to Introduction to the Holocaust page on the website of the United States Holocaust Memorial Museum.  It demonstrates the low calibre of the people in the administration of Donald J. Trump.  This during a week in which the criminal complaints in the states of Gerogia and Florida against Michael Ron David Kadar were made public.  Kadar for those who don’t know is responsible for the 2,000 plus hoax bomb threats to Jewish community centers, synagogues, consulates, police stations, airports, and airplanes in addition to assaulting a police officer, attempted extortion,  death threats, drug trafficking, and possession of child pornography.  He committed these alleged crimes in the states of New York, Alabama, Florida, Georgia, Ohio, Illinois, Texas, etc... and in the countries of Canada, Switzerland, Australia, France, New Zealand, etc... while residing in the criminal hideout known as Israel.  All the while, the media trumped up these so-called anti-semitic behaviors and the government in tandem also harped about the “domestic threat” of anti-Jewish terrorism.  This despite the FBI and Jewish officials knowing all the way back in January (at the latest) that the calls were originating from Israel.  Isn’t this ‘bomb libel’?  Where’s the apology to non-Jews for falsely accusing them of this Jew’s crimes?  When will they extradite Mr. Kadar to the United States of America?  When will the media show us photos of Michael?  Of his social media?  Will there ever be an expose on Kadar’s ties to the racial supremacist religion of Talmudic Judaism and Israeli intelligence?  This also begs the question, why does the United States send their police forces to train in Israel when these ‘keystone cops’ couldn’t solve Kadar’s crimes.  Or continue to send Israel $3 billion plus in welfare payments so-called “foreign aid” when their citizens are involved in such dastardly crimes?  This presidential proclamation also coincidentally falls on Armenian Genocide Remembrance Day of which Trump remains silent continuing the long held American tradition of Armenian Genocide denial. 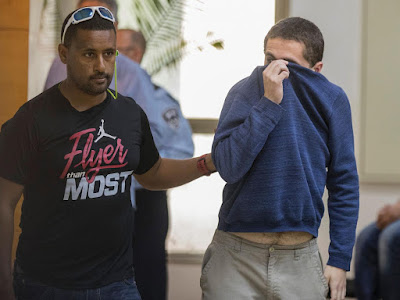 No handcuffs for international terrorist Michael Ron David Kadar even though he assaulted an Israeli police officer and took the officer’s gun from him during his arrest.  Notice that the Israeli courts also allow Mr. Kadar to hide his face and the media goes along with this Talmudic ‘double standard’.
Posted by hereisjorgebergoglio at 3:08 PM