Only two days on the job and Francis says, ‘Holy Ghost is almost an Apostle of Babel’ 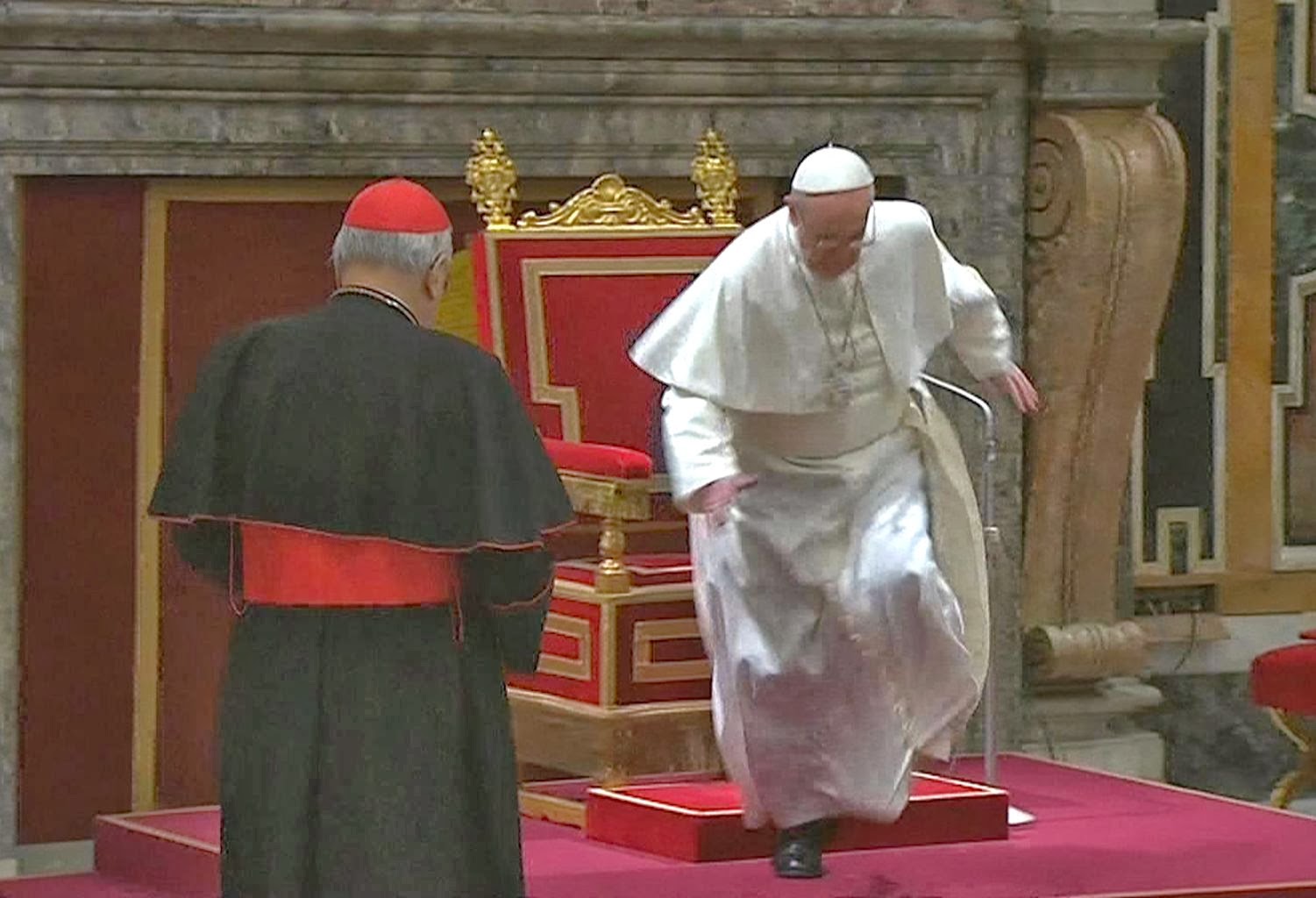 The first and only time Francis used the papal throne.


Francis has been making headlines on only a select number of Catholic blogs with his recent blasphemies and heresies against the Holy Trinity, St. Peter, and Jesus the Christ.  Why are the rest of the Catholic media ignoring Francis’ words, pretending as if he never said them?  This has been going on for quite some time.  It turns out that Francis in only his second day on the job spouted off more blasphemous trash — the Holy Ghost is responsible for the differences between the churches (and by this Francis means Protestants, Orthodox, Catholic, etc...) and one would not be mistaken if they thought that the Holy Ghost was an Apostle of Babel.  Thanks to nazareusrex for bringing this to our attention.

The Pontifical University of Chile’s magazine, Humanitas, published these words,


Thanks to the anonymous reader who pointed out that “si fuera un apóstol de Babel” translates into English as “like an apostle of Babel”.

In the original Italian statement, on the Vatican’s official website, which Francis is reading from it says, “e sembra che sia un apostolo di Babele” which translates into English as, “and it seems that he is an apostle of Babel”.


The Vatican’s official website, (underlines are ours for emphasis), English translation,


Dear brother Cardinals, this meeting of ours is intended to be, as it were, a prolongation of the intense ecclesial communion we have experienced during this period. Inspired by a profound sense of responsibility and supported by a great love for Christ and for the Church, we have prayed together, fraternally sharing our feelings, our experiences and reflections. In this atmosphere of great warmth we have come to know one another better in a climate of mutual openness; and this is good, because we are brothers. Someone said to me: the Cardinals are the priests of the Holy Father. That community, that friendship, that closeness will do us all good. And our acquaintance and mutual openness have helped us to be docile to the action of the Holy Spirit. He, the Paraclete, is the ultimate source of every initiative and manifestation of faith. It is a curious thing: it makes me think of this. The Paraclete creates all the differences among the Churches, almost as if he were an Apostle of Babel. But on the other hand, it is he who creates unity from these differences, not in “equality”, but in harmony. I remember the Father of the Church who described him thus: “Ipse harmonia est”. The Paraclete, who gives different charisms to each of us, unites us in this community of the Church, that worships the Father, the Son, and Him, the Holy Spirit.


So exactly how is the Holy Ghost almost an ‘apostle of confusion’?  The Holy Ghost is the Spirit of Wisdom.  It is the third person of the Blessed Trinity, proceeding from the Father and the Son and co-equal with Them — to equate confusion with the Holy Ghost is not only blasphemy but it is also heresy!  And to say that the Holy Ghost creates all the difference among churches — everyone should know by now that Francis includes all sorts and manner of heretics as members of the Novus Ordo church — wow, does this man have no shame?

As we wrote some time ago about this day, Jorge trips over the papal throne or a modernist trips over tradition?,


The only use we can find of Jorge using the Papal Throne took place in Sala Clementina at the Vatican City when he was introduced to the College of Cardinals on 15 March 2013.  Upon getting off the throne Jorge stumbled but caught himself.  The throne was gone the next day and replaced by a papal chair.  God often speaks in signs is this one of them?  Does it foreshadow what this papacy will bring, namely traditions which are inconvenient will be replaced with something new, novel, and easy but not necessarily Catholic?


Since then looking at Francis’ behavior and words we at Call Me Jorge... can conclude that Francis is replacing the Catholic Faith with a mixture of Hasidism and Gnosticism and transforming the Novus Ordo into a loyal Noahide servent of Talmudic Judaism.  For as we have written before, “By the time Francis gets finished with his reign in the Vatican, the Novus Ordo church will resemble a synagogue and the Vatican a shtetl.”

Francis meets with the College of Cardinals — 15 March 2013