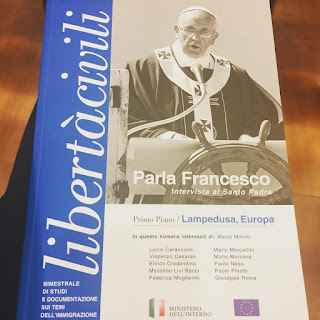 The English translation of Francis latest interview (28 march 2017) with the Italian journal Libertàcivili (Civil Liberties) was published by America: The Jesuit Review under the title of Read: Pope Francis’ new interview on the struggles of migrants and refugees.  The main focus of the interview is refugees and the new Vatican department which Francis has created to respond to the refugee situation.  The English translation of interview is republished below.

Your Holiness, on July 8, 2013, you made this statement while visiting Lampedusa: “I had to come here to pray,” you said, “to make a gesture of closeness but also to reawaken our consciences.” On April 16, 2016, you repeated this statement in Lesbos, adding your prayers to those of Archbishop Ieronymos of Athens and Patriarch Bartholomew of Constantinople. How can ecumenical and interreligious dialogue—not only among the three religions of the children of Abraham but also with all the others—contribute to a correct understanding of the problem of migration, with its burden of human suffering, as we look for possible solutions to welcoming those who arrive in Europe?

The visit to Lesbos and the prayers with Archbishop Ieronymos and Patriarch Bartholomew are a sharing of brotherhood, of closeness to the cries of the many innocents who ask only for a chance to save their own lives. Sharing in brotherhood with other religions appeals to our consciences not to turn our backs on the hopes and calls for help of our brothers and sisters in need.

Migration, if handled with humanity, is an opportunity for everyone to meet and grow. We cannot lose our sense of fraternal responsibility. The defense of human beings knows no barriers: We are all united in wanting to ensure a dignified life for every man, woman and child who is forced to abandon his or her own land. There is no difference of creed that can outweigh this wish—in fact, quite the contrary.

It is precisely in these contexts that we can be brothers working toward good—the same good—every day. If the same unity were embraced by those who govern different countries, as well, then maybe we could take some more concrete, global steps in support of migrants and refugees.

The island of Lesbos, like Lampedusa, shows the world the faces of innocent people who flee from wars, violence and persecution. Men, women and children traveling alone arrive tired, exhausted, hoping to save their own lives with dramatic journeys via land and, unfortunately, also via sea.

In Europe and around the world we are living through a critical moment in the management of migration policies. Those in power must be both far-sighted and coherent in watchful respect for fundamental human rights, as well as trying to end to the causes of forced migration which oblige civilians to flee.


The directives of your Motu Proprio (Aug. 17, 2016) for the creation of a new social Dicastery for the Promotion of Integral Human Development within the Catholic Church came into effect on January 1. For the social teaching of the church, the dicastery—which takes over the remit of various pastoral councils—is the new organizational destination of a long historical journey. What mission have you entrusted to the new dicastery, with regard to migrants and refugees?

Yes, I set up the Migrants & Refugees Section of the new Dicastery for the Promotion of Integral Human Development with a start date of Jan 1. 2017.

The multitude of migrants, refugees, displaced people and victims of human trafficking requires particular care. This is why I decided to take care of them personally, at least for a while, and why the section reports to me directly.

The section’s main mission is supporting the church and its leaders—at the local, regional and international levels—to accompany people through each step of the migration process, with particular attention to those who are forced in different ways to move or flee, or who experience disadvantage and suffering in countries of origin, transit or destination.

I am thinking of all those who flee from conflicts, persecutions or humanitarian emergencies, whether natural or caused by human intervention. I am thinking about victims of human trafficking, about undocumented migrants, about migrant workers in exploitative situations and about women, young people and children migrating in situations of vulnerability.


By their very nature, migrations are phenomena that cut across the borders of individual nations and even continents. In this sense, considering demographic projections for the coming decades, there is talk of a Eurafrican continent—momentous transitions, which call into question cultural identities, values and historical baggage. Different national policies must be tied together with international cooperation: This is a necessity you often mention. Having received much, Europe must learn to give. How do we make the move from awareness to action?

Like many other countries that have experienced both immigration and emigration, I think European nations must learn from their past. How difficult things were, in the post-war era, for millions of Europeans who took off, often with their entire families, and crossed the ocean to arrive in South America or the United States!

It was not an easy experience for them, either. They suffered the weight of being seen as foreigners, arriving from afar with no knowledge of the local language. It was not an easy process of integration, but it always ended in success!

Therefore, it is important to be aware of the contributions migrants make to their countries of arrival. Europeans contributed greatly to the growth of transatlantic societies. It is the same story. Any exchange of culture and knowledge is a source of wealth and should be valued as such. As I said on November 1, on the way back from my trip to Sweden, we must not be scared, because Europe was formed from a continuous integration of cultures—of many cultures.

If we can view migrants as an added value to our society, then we will be able to practice real welcome and to give what we have received in the past. We have a lot to learn from the past. It is important to act with awareness, without feeding the fear of foreigners.

On Feb. 21, I explained to participants at the Forum on Migration & Peace that we must promote welcome and hospitality toward refugees and displaced people, supporting their integration and bearing in mind the mutual rights and responsibilities of those who welcome and those who are welcomed. Integration—which is neither assimilation nor incorporation—is a two-way process, essentially based on mutual recognition of another person’s cultural wealth. It is not the flattening of one culture against another, and neither is it mutual isolation, which carries the dangerous, or even deadly, risk of ghettoization. As for those who arrive—who are responsible for not shutting themselves off from the culture and traditions of their host country and for respecting its laws first and foremost—we absolutely must not neglect the familial aspects of integration. Hence why I feel I have to keep reiterating the need for policies which favor and prioritize family reunification.

As far as indigenous people are concerned, they must be helped: They need to be appropriately sensitized and supported to be positively predisposed towards the process of integration, which is not always simple or immediate but is always essential and indispensable for the future. This is why we also need specific programs favoring meaningful encounters with new arrivals.

As for the Christian community, the peaceful integration of people from different cultures is, in some way, a reflection of its Catholicism: a unity which does not override ethnic or cultural diversity constitutes a dimension of church life, which in the Pentecostal spirit is open to all— open to embracing everyone.


On Sept. 22, 2016, during an audience with a delegation of Italian journalists, you called for the development of a true culture of encounter. There is no difficulty, you said, which men of good will cannot overcome. In 1991 the Caritas director in Rome, Msgr. Luigi di Liegro, inaugurated an annual dossier of immigration statistics because, he said, real information on dynamics of migration is the only thing that can defeat all the existing prejudice, clichés and closure. For the sake of truth, how do we keep this debate alive in the context of modern-day communications, so extraordinarily amplified by new media?

Mass media should feel obligated to explain the different aspects of migration, schooling public opinion on the causes of this phenomenon. Human rights violations, violent conflicts of social disorder, lack of essential goods, natural catastrophes and catastrophes caused by humans: All these things should be clearly explained in order to support a real understanding of the migration phenomenon and, consequently, a correct approach.

This is unfair: It is information based on the wrong premise, which pushes public opinion to develop negative judgments.

Not to mention, of course, the sensationalism favored by most modern-day media. A bad news story has more impact than a good news story, and so it is more profitable to talk about a few crime cases involving migrants than to tell the many stories of integration promoted by migrants themselves.

Better information could break down the barriers of fear and indifference. The other, the different, is scary when it is unknown. But if we talk about it, and introduce it to people’s homes via images and stories, presented in its most positive, human aspects, then knowledge goes beyond stereotypes and the encounter becomes authentic. And when we get past fear, doors are opened, and welcome is spontaneous.

As I said to E.U. heads of state and government on the 60th anniversary of the signing of the Treaty of Rome, openness towards the world requires a capacity for dialogue as the basis of encounters on all levels—from dialogue between member states, and between institutions and citizens, to dialogue with the many migrants who arrive on E.U. shores. We cannot simply manage the major migration crisis of our times as if it were just a problem of numbers, economy or security. The issue of migration poses a deeper question, which is cultural first and foremost.

Adding value to Europe!
Posted by hereisjorgebergoglio at 10:29 AM