(Communicated by the President’s Spokesperson)

President Reuven Rivlin today (Thursday) at his residence was presented with a new publication in Hebrew of Vatican papers entitled “In our Time” (from the Latin ‘Nostra Aetate’). The work, led by Professor Dina Porat of the Kantor Center for the Study of Contemporary European Jewry at Tel Aviv University, included documents and research in Hebrew relating to the relationship between the Catholic Church and the Jewish people, and the Holocaust, dating back to 1965 - the year of the Vatican declaration, “Nostra Ateta”, also known as the “Jewish Document”, which removed the accusation of deicide from the Jewish people.

The meeting was addressed by President Rivlin as well as Apostolic Administrator of the Latin Patriarchate, Archbishop Pierbattista Pizzaballa, renowned expert on Jewish-Christian relations and International Director of Interreligious Affairs of AJC, Rabbi David Rosen, and Professor Porat. Also attending was Italian Ambassador to Israel, the Papal Nuncio, Israel’s Ambassador to the Vatican, and other leading Rabbis and members of the clergy.

President Rivlin congratulated Professor Porat and all those involved in the research and translation of the publication. The President spoke of a meeting in 1904 that had taken place between leader of the Zionist movement, Theodore Herzl, and then Pope Pius X. In the meeting, the Pope had refused to support the Jews return to the Land of Israel, and said, “The Jews did not accept Jesus and therefore we cannot accept the Jewish people”. The President noted, “We have come a long way since the meeting of Pope Pius and Herzl”, and added, “The Nostra Aetate dealt with the relations between the Catholic Church and people of other faiths. But as for the relationship with the Jewish people, it was a revolutionary statement. Unfortunately, 50 years later this revolution is still silent; most of the Jews in Israel and around the world know very little about this deep change regarding the Jewish faith, the Jewish people, and the Jewish state. And being honest, I am not sure how many Christians around the world know about this important process. I hope this book will help more than a little, by ensuring Hebrew readers know more and understand better the Catholic Church and its followers.”

He concluded, “The Catholic Church’s revolutionary change can bring understanding, compassion and a deep sense of brotherhood which is needed at any time, and maybe today more than ever. Faith can bring people together.”

Professor Dina Porat thanked the President and all the participants, and said, “This document was a theological earthquake. It was the beginning of a new era in which since 1965 until today, until the last declaration by the present Pope in 2015, documents in this period are imbued with a wish for rapprochement, for a dialogue, with the Jewish people. And this wish has not been known in Israel until now. The public at large does no know about these developments, about this process.”

She noted of the publication, “So that the picture would be as full as possible, we also included speeches by the Pope and his two predecessors; speeches given in the Great Synagogue in Rome, the notes they placed in the Western Wall, and conversely speeches in Yad Vashem, and in Auschwitz - we also translated them all. They are all written in a warm and respectful language toward the Jewish people.”

Apostolic Administrator of the Latin Patriarchate, Archbishop Pierbattista Pizzaballa, thanked President Rivlin for hosting the meeting, and expressed his appreciation for his visit just a day earlier to the Latin Patriarchate in Jerusalem’s Old City. He noted, “All these circumstances for sharing within our society are a concrete sign of the numerous initiatives of vitality and care concerning our common lives. In 27 years of life in Israel, I am personal witness of the big positive change in Israeli society toward the Christian world, locally and internationally.” He added, “The initiative of Pr. Dina Porat is one of many examples.”

He went on to note, “The historical relations between Christians – and in this case Catholics – and Jews have been very problematic and painful. But it is also known that in the last decades the Catholic Church changed completely its attitudes towards the Jewish people and the Jewish faith. These changes of course are still to be made better known in our Catholic societies, not only in Europe, but in other continents where most Catholics live, and yes, here in the Middle East.”

The Archbishop stressed, “This new attitude toward of the Catholic Church towards the Jewish people is irreversible. The fight today against any form of anti-Semitism – ancient and modern – is not anymore the solitary fight of yours, but a common attitude in which you can consider us, the Catholic Church, your friends. We know that there are still problems in this regard, but our determination to continue in this direction is total and irreversible.”

Rabbi Rosen commented on the importance of the publication and said, “This translation is historically unique because I believe it is fair and correct to say that there is nothing comparable in human history,” and added, “of course there have been attitudes that have changed in the course of human history, but nothing quite that can describe the Catholic Church – which represented the prevailing view within Christendom that the Jews had been condemned, rejected by God, destined to wander forever.” He noted, “To have gone from such a negative view of the nature of the Jews, to a situation of today where Popes have described the Jewish people as the ‘dearly beloved elder brother of the Church, of the original covenant never broken and never to be broken’ in the words of Pope Jean Paul II. There is nothing comparable in human history to such a degree, and this is what this book celebrates.” 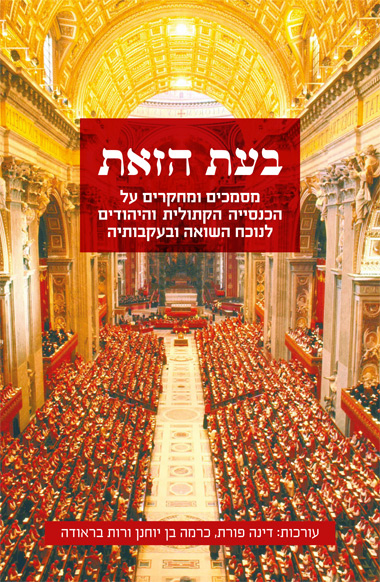 בעת הזאת: מסמכים ומחקרים על הכנסייה הקתולית והיהודים לנוכח השואה ובעקבותיה
(In Our Time: Documents and research on the Catholic Church
and the Jews in light of the Holocaust and its aftermath)


This book is a compilation of writings centered around Nostra Aetate as well as Nostra Aetate itself. It was translated into modern Hebrew and edited by: Dina Porat, the chief historian of Yad Vashem; Dr. Karma Ben Johanan, who specializes in studying the “New Evangelization”; and Ruth Braude, A Jew who escaped the concentration camps of WWII by posing as a Catholic.  The editor Porat explains the reason for the book and its contents is, “so that the picture would be as full as possible, we also included speeches by the Pope and his two predecessors; speeches given in the Great Synagogue in Rome, the notes they placed in the Western Wall, and conversely speeches in Yad Vashem, and in Auschwitz – we also translated them all. They are all written in a warm and respectful language toward the Jewish people.”

Posted by hereisjorgebergoglio at 12:22 AM