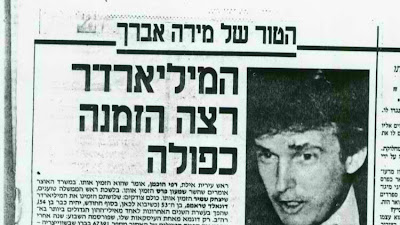 Excerpts from Haaretz’s article, Israel Releases 'Trump File': The U.S. President's Little-known 1989 Visit to the Jewish State by Ofer Aderet.  Underlines are ours for emphasis.

Among the projects that Trump showed an interest in during his visit was building a casino in Eilat. In the Trump file, one of the documents notes that this was the "practical reason" for Trump's visit, "since that is Mr. Trump's field."

Trump, who was 43 at the time, arrived in Israel on July 29, 1989 on his private jet.  An unnamed deputy minister - probably Yossi Beilin, then-Finance Minister Shimon Peres’s deputy - welcomed the tycoon at the airport.

The next morning Trump had breakfast with Beilin and Teddy Kollek, the mayor of Jerusalem. They then went on a tour of Jerusalem’s Old City, several museums and Bethlehem, which was under full Israeli control at that time, before the establishment of the Palestinian Authority.

After lunch Trump flew to the Dead Sea, accompanied by Peres, where the billionaire was presented with a development project. He then flew to an area in the northern Negev desert that had been constructed for people who had been evacuated seven years earlier from the Israeli settlement of Yamit in Sinai. Trump also visited a moshav and a kibbutz and asked to see a playground he had donated to the Jewish National Fund.

Trump then traveled to Mitzpe Ramon in the Negev desert and visited the Ramon military base. He finished the day in Eilat, where he watched the sunset and dined at the Neptune Hotel, followed by a nighttime tour of the Red Sea resort town.

According to plan, Trump started his second day with a dive at the coral reef reserve in Eilat. He then attended to business, visiting several potential sites for investment - including an airport - and examined opportunities for investing in Tel Aviv and Herzliya. After meeting with then-Prime Minister Shamir, Trump returned to the U.S. by the end of the day.

The documents kept in the state archive’s Trump file also include quotes sent to the Foreign Ministry by different upscale hotels competing for the opportunity to host Trump. Hyatt Regency in Jerusalem, boasting a deluxe 5-star rating, offered a “room facing Jerusalem’s magnificent views, a fruit basket and a daily newspaper.” Ultimately, however, another hotel had the honor of hosting the billionaire. A letter to the Foreign Ministry from the Laromme Hotel confirms the reservation for the corresponding dates. 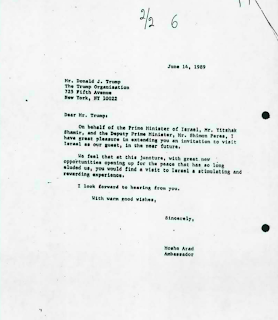 The hotel made some concessions to its guests, saying that it would only charge Peres the rates for a regular room while giving him a suite. This implies that Trump and Peres slept at the same hotel during the businessman’s visit.

The question of who invited Trump and why is answered in a letter by journalist Mira Avrech, also kept in the archives. Three people claimed to have initiated the invitation: former Prime Minister Shamir, former Finance Minister Peres and former Eilat Mayor Rafi Hochman. According to Avrech, all three are correct since they indeed all invited Trump, albeit on different occasions. Considering purchasing El Al, Trump was keen to visit. Due to his concerns about internal Israeli politics, however, he requested an official invitation. The invitation was signed by Israel’s then-ambassador to the U.S., Moshe Arad, in the name of the prime minister and his substitute.

...with the Chasidic couple Jared & Yael 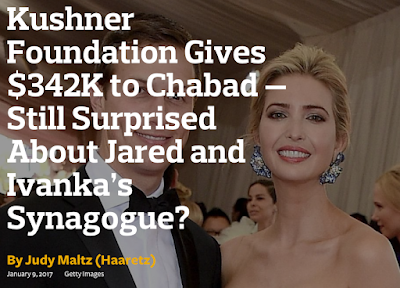