The delusions of the Talmud - Mishnah Tractate Parah

Nine red heifers were offered from the time that they were commanded to fulfill this mitzvah until the time when the Temple was destroyed a second time. The first was brought by Moses, our teacher. The second was brought by Ezra. Seven others were offered until the destruction of the Second Temple. And the tenth will be brought by the King Moshiach; may he speedily be revealed. Amen, so may it be G‑d’s will. 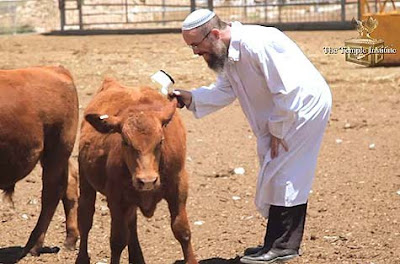 It's not just that the law of the Red Heifer cannot be logically explained; indeed, there exists an entire category of mitzvot, called chukim ("decrees"), whose defining criteria is that they transcend human understanding. What's unique about the Red Heifer is that while the other chukim at least follow an internal logic of their own, the laws of the Red Heifer are fraught with paradox and inconsistency. To cite but several of numerous examples:

a) The ashes of the Red Heifer remove the most severe of all impurities; yet those involved in its preparation become ritually impure themselves.

b) The Red Heifer must be completely red (as few as two hairs of a different color disqualify it)a color which has connotations of sin and deficiency in Torah and Torah law; yet it must also be "perfect, without blemish."

d) The two components of the purifying mixture--ashes and spring water--represent two contradictory forces: fire, which represents the power of ascent, and water, which embodies the quality of "settling down" and saturation.


Thus the laws of the Red Heifer are introduced by the Torah with the words "This is the chok of the Torah", as if to say: this is the Torah's ultimate chok, the mitzvah that most vividly demonstrates to supra-rationality of its divine commandments.