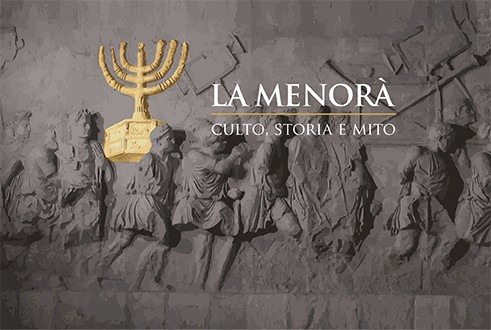 The Menorah: Worship, History, and Myth

“The exhibition "La Menorà. Culto, storia e mito" (The Menorah: worship, history and myth) is the name of the exhibition that from 16 May to 23 July will be on simultaneous display in the Braccio di Carlo Magno of the Vatican Museums, and in the Jewish Museum of Rome.

The exhibition represents the first joint project between the two institutions, and is a high profile cultural and symbolic initiative, a "sign of successful collaboration between Jews and Christians in the city where they have lived side by side for over twenty centuries".

The exhibition, curated by Alessandra Di Castro, Arnold Nesselrath and Francesco Leone, narrates the history of the Menorah – the seven-branched lamp and symbol of the identity of the Jewish people – through a complex and rich itinerary featuring 150 works of art, comprising sculptures, paintings, architectural elements, manuscripts and book illustrations.” 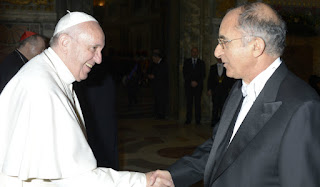 
The reason given by the Vatican for ‘La Menorà Culto, storia e mito’ exhibit is, “to make an actual conrtibution to dialogue and cooperation between the Jewish and the Christian world”.  Dialogue is a one-way racket or one-way street with the Novus Ordo goose-stepping to the dictates of the Talmudic Jews.  Four years in the making, this “project is based on the most ancient and important identity symbol of Judaism.”  The impetus behind the idea was Zion Evrony, the then Israeli ambassador to the Holy See, who was inspired in October 2013 when at the Jewish Museum of Rome examining a hodgepodge of menorah images and fables.  It was decided to base the new exhibit on the 2008 exhibit ‘Da Gerusalemme a Roma, e ritorno: il viaggio della menora fra storia e mito’ shown at the Jewish Museum of Rome.   Zion Evrony is buddies with Francis.  Not only did he help organize Francis’ trip to Israel in 2014, he accompanied him there!   Enrony was the Israeli ambassador to the Vatican from 2012 to 2016 and currently teaches at the Catholic University of America (i.e. the pope’s university).

Barbara Jatta, the Director of the Vatican Museums, writes, “This is the first time our two communities have cooperated with such commitment and the significance and value of such a relationship is evinced by its inherent symbolic meaning.”  Jatta continues later explaining one dimension of this symbolism, “The Braccio di Carlo Magno at the Vatican is an imposing and prestigious venue. [...] It is a prominent exhibition space because it is located in the heart of the Vatican, in the symbolic center of the State of the Vatican City, and also because it is part of the ideal embrace of the faithful and of all peoples created by Pope Alexander Chigi and Bernini through the design of the colonnade in St. Peter’s Square.”

The exhibits includes, “astonishing and dazzling rarities as a large 1st century stone engraved with a bas-relief from the site of the ancient synagogue of Magdala in Galilee, discovered only a few years ago, some extremely rare Roman glass decorated in gold, sarcophagi and tombstones from the Jewish catacombs in Rome, the Carolingian Bible of St. Paul, the imposing 14th and 15th century Christian seven-branch candelabra, Roman Baroque silverware and paintings by such masters as Giulio Romano, Andrea Sacchi, Nicolas Poussin and Marc Chagall. And finally, an important role will be played by educational panels in a concrete effort to encourage children to set off down the path of knowledge, dialogue and mutual understanding.”

What does the Vatican have to say about “the emblem of Judaism par excellence”?  In their official press release one reads that the menorah is also, “a tangible evocation of divine light, of the cosmic order of creation and of the ancient covenant, a symbol of the Burning Bush and the Tree of Life, a testimonial to the biblical Shabbat”.  The press release even states that Christianity appropriated the menorah from the Talmudic Jews!  What a bunch of malarkey.

According to the Talmudic Jews, the menorah symbolizes the wisdom of the Talmud and the light it shines on the world of darkness.  The blasphemous Talmud, “illuminates the path to a spiritual, meaningful and fulfilling life.”  Not only does it symbolize that but also the “indestructibility” of the Talmudic Jews who “are the constant light that never went out!”


Kabbalistic Symbolism of the Menorah 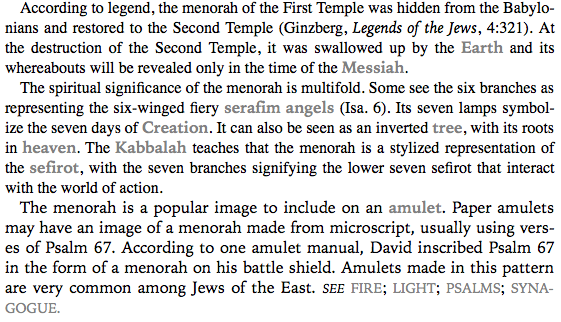 
Rabbi Riccardo Di Segni, the chief rabbi of Rome, writing in the exhibit catalogue said, “The Jewish link with the menorah is ancient, strong and full of symbolic significance, and the link has never been broken.”  The ‘miracle of Hannukah’, according to the rabbis, in which a menorah was lit for eight days even though there was not enough oil for eight days, happened because of God’s “delight in the Jewish people” themselves, and their vainglorious celebrations.  With the material covered above it is obvious that the formerly occult is now blatantly on public display for the world to see.  The heart of the Vatican is the emblem of Judaism par excellence.  Francis and his rabbinical brethren are continuing to alchemically process the pew sitters into their noahide golem creatures.  The only thing left is for the Chabad-Lubavitchers to erect one of their giant Maimonides’ menorahs in St. Peter’s Square.  As we have previously written,

“soon St. Peter’s will resemble a synagogue and the Vatican a shtetl.”


The delightful vainglorious celebrations of the indestructible Talmudic Jews, the light that never went out!
Posted by hereisjorgebergoglio at 5:00 PM