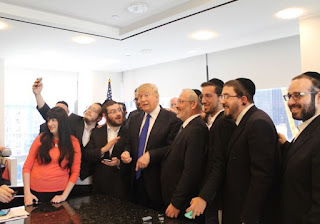 Like his predecessor, Barack Hussein Obama, president Donald J Trump has proclaimed the month of May as Jewish American Heritage Month.  Notice in the first paragraph the citing of the concept of “tikkun olam”  from the Lurianic Kabbalah.  This “tikkun olam” is a repairing of the imperfect world which was created by God.   What are the imperfections in the world?  “Tikkun Olam” is a tribal concept and not a universal one.  For by repairing the world, what is meant is exterminating from the world Amalek or the enemies of the Jews.  What an ethical and moral code!  An example of the Lurianic Kabbalah’s “tikkun olam” is pornography — used to destroy the morals and corrupt the youth of those perceived as the enemy.

The White House
Office of the Press Secretary
For Immediate Release

Jewish American Heritage Month, 2017
- - - - - - -
By the President of the United States of America
A Proclamation
During Jewish American Heritage Month, we celebrate our Nation's strong American Jewish heritage, rooted in the ancient faith and traditions of the Jewish people.  The small band of Dutch Jews who first immigrated in 1654, seeking refuge and religious liberty, brought with them their families, their religion, and their cherished customs, which they have passed on from generation to generation.  The moral and ethical code of the Jewish people is inspired by their spiritual vocation of "tikkun olam" ‑‑ the charge to repair the world.  Through that vocation, the Jewish people have left an indelible mark on American culture.  Today, it is manifested in the towering success Jewish people have achieved in America through a unique synthesis of respect for heritage and love of country.
Escaping religious persecution and ethnic violence and seeking political freedom and economic opportunity, American Jews, over centuries, have held firm in the belief that the United States was "Di Goldene Medina" ‑‑ the Golden Country.  Those who moved here built houses and gardens, raised families, and launched businesses.  They have pursued education to advance their mission to make the world a better place.  In every aspect of the country's cultural, spiritual, economic, and civic life, American Jews have stood at the forefront of the struggles for human freedom, equality, and dignity, helping to shine a light of hope to people around the globe.
The achievements of American Jews are felt throughout American society and culture, in every field and in every profession.  American Jews have built institutions of higher learning, hospitals, and manifold cultural and philanthropic organizations.  American Jews have even brought us our greatest superheroes ‑‑ Captain America, Superman, and Batman.  American Jews have composed some of our defining national hymns like God Bless America, timeless musicals like The Sound of Music, and even famous Christmas songs.  From Admiral Hyman G. Rickover to Albert Einstein, Richard Rodgers to Irving Berlin, Jerry Siegel to Bill Finger, Mel Brooks to Don Rickles, and Levi Strauss to Elie Wiesel, American Jews have transformed all aspects of American life and continue to enrich the American spirit.
This month, I celebrate with my family ‑‑ including my daughter, Ivanka, my son-in-law, Jared, my grandchildren, and our extended family ‑‑ the deep spiritual connection that binds, and will always bind, the Jewish people to the United States and its founding principles.  We recognize the faith and optimism exemplified by American Jews is what truly makes America "The Golden Country," and we express our Nation's gratitude for this great, strong, prosperous, and loving people.
NOW, THEREFORE, I, DONALD J. TRUMP, President of the United States of America, by virtue of the authority vested in me by the Constitution and the laws of the United States, do hereby proclaim May 2017 as Jewish American Heritage Month.  I call upon all Americans to celebrate the heritage and contributions of American Jews and to observe this month with appropriate programs, activities, and ceremonies.
IN WITNESS WHEREOF, I have hereunto set my hand this twenty-eighth day of April, in the year two thousand seventeen, and of the Independence of the United States of America the two hundred and forty-first.