Two ‘humble’ men getting together to discuss.


Francis gave The Donald copies of his Peace Day Message, Evangelii gaudium, Laudato Si', and Amoris Laetitia as well as a medallion showing an olive tree uniting divided lands in peace.  In return Trump gave Francis the five works of the communist misogynist plagiarizer, Michael King, Jr. (Martin Luther King, Jr.) and a bronze sculpture named “Rising Above”.  The White House said the sculpture, “represents hope for a peaceful tomorrow.”  We at Call Me Jorge... are guessing that Francis will treasure the books as not only does Francis admire King, Jr. but they share the same intellectual father, rabbi Abraham Heschel.  We also wonder if Trump and Francis discussed their roles as representatives of the Left & Right pillars of the Kabbalistic Sephiroth in their approaches towards Islam.  Everyone knows Francis is the Left and represents Chesed or compassion by wanting to embrace Moslems and welcome them into Christian countries, while Trump is the Right and stands for Gevurah or severity as he wants to expand the ‘War on Terror’. 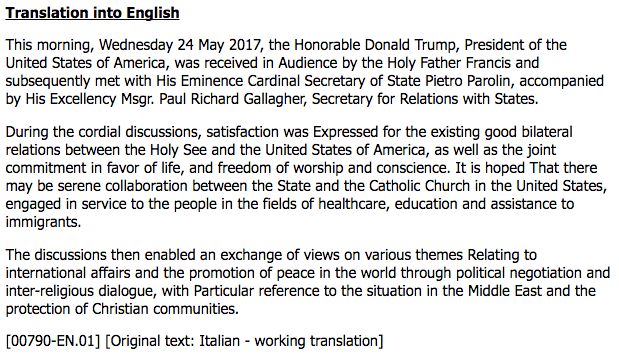 Posted by hereisjorgebergoglio at 12:40 AM