Cardinal George Pell charged with at least three serious sex assault charges, including at least one count of rape


Cardinal George Pell serves as the inaugural and current Prefect of the Secretariat for the Economy since being appointed to the position by Francis in 2014.  He is the third most senior person serving in the Vatican bureaucracy.  Pell denies all charges and looks forward to his day in court.  When asked in August 2016 about Pell and the alleged crimes, Francis said, “But, we must wait for justice and not make a first judgement ourselves, a media trial, or...because this doesn't help. The judgement of gossip and then, one can...we don't know what the result will be but be attentive to what justice decides. Once justice speaks, I will speak. Thank you.” 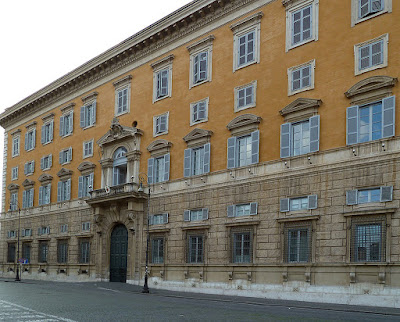 In a related story, Il Fatto Quotidiano - Vaticano, fermato un monsignore: festini gay e droga al Palazzo dell’ex Sant’Uffizio, is reporting that the gendarmerie of the Holy See caught red-handed a monsignor in an apartment in the palace of the former Holy Office participating in homosexual drug fueled orgy.  The anonymous monsignor serves as secretary for an important cardinal of the Roman Curia who heads one of its departments.  He was sent to detoxify from drugs at the Pius XI clinic in Rome and has now been spirited off to a convent where he is on retreat.  This monsignor also used a car with the diplomatic license plates of the Holy See to transport drugs.  It was reported as well, that he was soon to be promoted to the rank of bishop.  When Francis was notified of the monsignor being caught in the act he was “enraged”.  One of the monsignor’s fellow priests said, “He had proposed his secretary for the episcopate.  Luckily they have not made him a bishop.  Now imagine what could have happened?”
Posted by hereisjorgebergoglio at 9:22 PM