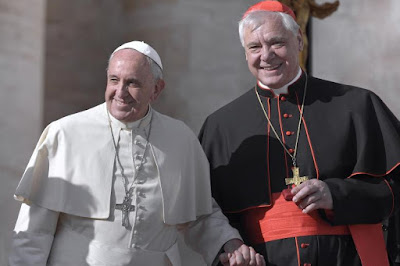 His Eminence, Cardinal Gerhard Ludwig Müller, Prefect of the Congregation for the Doctrine of the Faith since July 2, 2012, was dismissed by Pope Francis at the exact expiration of his term of 5 years.

Cardinal Müller is one of the cardinals who have tried to interpret ‘Amoris laetitia’, using a hermeneutic of continuity with the Tradition of the Church. This was enough to count him among the critics of the new course imposed by Pope Bergoglio.


Clarin reported on 24 June 2017 in the article, El Papa avanza en la renovación y relevaría al guardián de la ortodoxia, that Müller and Francis didn’t see eye-to-eye on many matters.  Also reported by them was that Francis wouldn’t renew Müller’s position as head of the Prefect of the Congregation for the Destruction of the Faith come July.  The above article published on the website of Corrispondenza Romana confirms these rumors.  This is interesting because both Müller and Francis are two heretical peas in a pod.  Müller has said that communion could be given to unrepentant adulterers (divorced and remarried) in exceptional cases, denies the Resurrection, and denies the Catholic Dogma of Transubstantiation, as well as denies the Dogma of Perpetual Virginity of Our Lady!  Apparently those positions were too conservative for the radical Francis.

According to the Vatican’s Bollettino, Francis had a private audience with Müller this morning where he was likely notified of the decision.  In the past Müller had laughably denied that there were cardinals opposed to Francis calling the idea “absolutely absurd” and told Bp. Fellay of the SSPX,  that the Congregation for the Destruction of the Faith is, “waiting for you to help us fight the modernists” in the Novus Ordo church.  We are guessing that Cardinal George Pell is thankful for this move as the Italian media has something else to focus on besides his recent charges.  That leaves us with speculation as to whom Francis will choose as Müller’s replacement as Prefect of the Congregation for the Destruction of the Faith.  We at Call Me Jorge... believe it will be someone who makes the modernist Müller appear conservative.

Did interviews like this make Müller fall out of Francis’ favor? 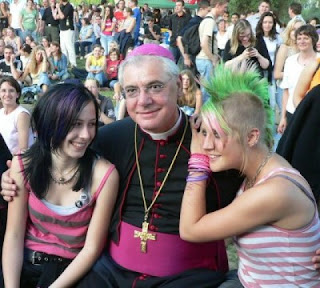 One hopes and prays that Müller stays away from youth.
Posted by hereisjorgebergoglio at 4:07 PM