This video was made under the auspices of The Elijah Interfaith Institute.  This institute was founded in 1996 by the the crypto-haredi rabbi, Alon Goshen-Gottstein who specializes in Talmud, Jewish thought, and interreligious dialogue; and is financed by the the UNESCO agency of the United Nations.  It is headquartered in Jerusalem and its purpose is to make good noahides out of all the myriad of religions in the world.  They believe that all idol-worship (including what passes for Christianity today) is okay as long as it is subordinate to Talmudic Judaism.  The Elijah Interfaith Institute is also heavily into mysticism and the occult.

Notice in the video the mentions of:

This video and the remaining twenty produced by The Elijah Interfaith Institute are anti-Catholic in the highest sense of the word.  Taken together they preach a form of gnostic perennialism under the umbrella of the rabbinic talmudists.  This goes against what Francis is supposed to be representing on earth as the ‘Vicar of Christ’.


“Bear not the yoke with unbelievers. For what participation hath justice with injustice? Or what fellowship hath light with darkness? And what concord hath Christ with Belial? Or what part hath the faithful with the unbeliever? And what agreement hath the temple of God with idols? For you are the temple of the living God; as God saith: I will dwell in them, and walk among them; and I will be their God, and they shall be my people. Wherefore, Go out from among them, and be ye separate, saith the Lord, and touch not the unclean thing: And I will receive you; and I will be a Father to you; and you shall be my sons and daughters, saith the Lord Almighty.”

source: The Second Epistle to the Corinthians 6, 14-18


Let’s return for a few minutes to The Elijah Interfaith Institute.  The name of the institute is a very interesting one.  For Catholics, in the Old Testament (see Kings) the prophet Elias was opposed to idol worship and the prophets of Baal.  Talmudic Judaism sees Elijah in quite a different manner.

Talmudists believe that Elijah witnesses the bris (brit milah or circumcision) the seal of the old covenant (which has been superseded by the New Covenant).


“Since medieval times, when a brit milah is performed, a chair is set aside for Elijah, the “Angel of the Covenant,” who is believed to be present at every brit milah.”


He also makes an ‘appearance’ at the anti-Christian Seder Meal:


Another ritual involving cursing the Gentiles is the famous custom of reciting "Pour Out Thy Wrath" (Shefokh hamatkha) at the Passover seder ... It's earliest mention appears in Mahzor Vitry ... This section of the [Passover] Haggadah is understood by the participants as closely connected with the future Redemption. Opening the door to the prophet Elijah in tandem with the prayer for vengeance signifies a connection between vengeance against the Gentiles and the appearance of the Messiah. It should also be noted that this section of the Haggadah is recited as an introduction to the fourth and last cup of wine, the cup of deliverance ...

The messianic content of "Pour Out Thy Wrath" was illustrated in illuminated Ashkenazic Haggadot through pictures depicting the Messiah riding on a donkey with Elijah by his side, proclaiming his coming. [Antonius] Margarita ... relates the popular Jewish exegesis of the Messiah's donkey ...

I think that I myself sincerely believed the lies told below. Blessed be God and the Holy Spirit, who saved me from such and other errors. According to the lies of the Jews, when the Messiah comes he will ride upon an ass and seat all Jews upon the ass, while all Christians will sit on the ass's tail. Then the Messiah will ride with all his passengers into the sea, and when he comes to the depths of the sea, the donkey will drop its tail and all the Christians will fall into the sea and drown. And indeed, this will have to be a very big ass. But an even bigger ass is a person who believes such things! (Antonius Margarita, Ein kurner Bericht und Anzaigung [Wien, 1541], fol. IIv).


Talmudists believe that Elijah teaches that non-Jews don’t have souls: 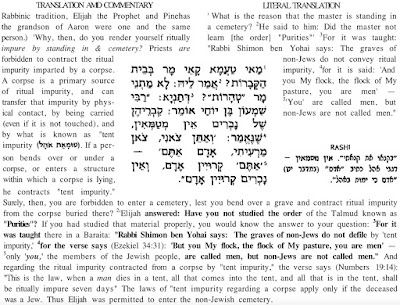 source: The Talmud, The Steinsaltz Edition, Tractate Bava Metzia 114b


Elijah announces to the rabbis that they have defeated God: 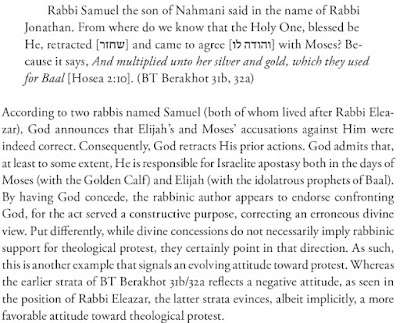 
Elijah is thought to be the teacher of secret doctrines (Kabbalah) to the rabbis:


The mystics and cabalists of all times frequently appealed to Elijah as their patron. Among them was the gaon Joseph, of whom it was said that Elijah was a daily visitor at his academy (First Epistle of Sherira, ed. Neubauer, p. 32). The introduction of the Cabala to Provence is traced directly to Elijah, who revealed the secret doctrine to Jacob ha-Nozer. Similarly Abraham b. Isaac and Abraham ben David of Posquières are mentioned as privileged ones, to whom Elijah appeared (see Jellinek, "Auswahl Kabbalistischer Mystik," pp. 4, 5). The pseudonymous author of the "Ḳanah" asserted that he had received his teachings directly from Elijah. In the Zohar, Simon ben Yoḥai and his son Eleazar are mentioned as among those who enjoyed the special friendship of Elijah. This work, as well as the Tiḳḳun Zohar and the Zohar Ḥadash, contains muchthat is ascribed to Elijah (compare Friedmann, "Seder Eliyahu Rabba we-Seder Eliyahu Zuṭa," pp. 38-41). When, toward the middle of the fourteenth century, the Cabala received new prominence in Palestine, Elijah again took a leading part. Joseph de la Regna asks Elijah's advice in his combat with Satan. The father of the new cabalistic school, Isaac Luria, was visited by Elijah before his son was born. In like manner, the father of Israel Ba'al Shem-Ṭob received the good news from Elijah that a son would be born unto him, "who would be a light in Israel" ("Ma'asiyyot Peliot," pp. 24, 25, Cracow, 1896, which contains an interesting narrative of Elijah's meeting with the father of Ba'al Shem-Ṭob).


We could go on but we believe the reader has an idea of what the Elijah of the Talmudic Jews represents and that he has little to do with the prophet Elias of the Old Testament.  Is it beginning to sink in how bad Francis and his rabbinical buddies are?

Below are the religious leaders who made videos for The Elijah Interfaith Institute.  It’s a motley crew of anti-Christs who all long to see the contrivances of the Talmudic rabbis implemented through the nightmare of noahidism.

Excerpts from the above mentioned videos.

Posted by hereisjorgebergoglio at 5:12 PM