The mask if off and all should be able to see Francis for the humanist gnostic that he is. 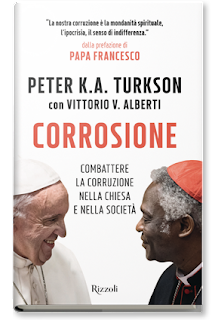 (Due to time considerations, Call Me Jorge... used an online translator for the text below and cleaned it up slightly.  We did read it in its original Italian and the translation reflects the Italian.)

Corruption, in its etymological root, defines a laceration, a break, a decomposition and disintegration. Whether as inner state or as a social fact, its action can be understood by looking at the relationships that man in his deepest nature. The human being has, a relationship with God, a relationship with his neighbor, a relationship with creation, that is the environment in which he lives. This triple relationship - which is also part of the man himself - gives context and meaning to his acts and, in general, to his life.

When man meets the needs of these relationships it is honest, he assumes responsibilities with uprightness of heart and works for the common good. But when he suffers a fall, that is imperishable, these relationships are torn. Thus, corruption expresses the general shape of the disordered life of fallen man. At the same time, even as a result of the fall, corruption reveals an anti-social conduct strong enough to melt the validity of the relationships and then, later, the pillars which underpin a society: the coexistence of people and the vocations which develop it. Corruption breaks all this by replacing the common good with a particular interest that contaminates every general perspective. It arises from a corrupt heart, and is the worst social problem, because it creates very serious problems and crimes involving everyone. The word “corrupt” recalls broken hearts, a broken heart, stained by something, like a ruined body that naturally enters a process of decay and stench.


At the origin of injustice

What's the origin of man's exploitation? What, at the origin of the degradation and the lack of development? What, is at the origin of trafficking in persons, arms, drugs? What, is at the origin of social injustice and the humiliation of merit? What, is at the origin of the absence of services for people? What, is at the root of slavery, unemployment, neglect of the city of common goods and nature? What, in short, wears the fundamental right of the human being and the integrity of the environment? Corruption, which is in fact the weapon, it is also the most common language of the mafias and criminal organizations in the world. For this, it is a process of death that gives life to the culture of death of the mafias and criminal organizations. There is a deep cultural issue that should be addressed. Today most people can not even imagine the future; Today it is difficult for a young man to truly believe in its future, any future, and so for his family. This our change of era, a very wide crisis, it portrays the deepest crisis involving our culture. In this context it should be seen and understood as corruption in its various aspects. It is the presence of hope in the world, without which life loses that sense of inquiry and possibilities for improvement that makes it so.


The man should be seen in every aspect

In this book, Cardinal Peter Turkson, now prefect of the Congregation for the Service of Human Integral Development, and former president of the Pontifical Council for Justice and Peace, explains well the ramification of these meanings of corruption, and does so with a particular focus on the inner origin of this, which in fact, germinates in the human heart and can take root in the hearts of all men. We are, in fact, all very exposed to the temptation of corruption and even when we think we have it defeated, it may reoccur. Man should be seen in all his aspects, he can not be divorced according from his activity, and so corruption is to be read - as we read in this book - all at once, for the whole man, both in his expressions of crime in the political, economic, cultural, and spiritual. In 2016 he ended the extraordinary ‘Jubilee of Mercy’. The mercy allows one too overcome themsleves in the spirit of searching. What if one arises in oneself and if one’s mind and heart do not explore a wider horizon?  There is the corrupt, and corrupting assumes the triumphalist attitude of those who feel smarter and more cunning than others. The corrupt person, however, does not realize that he are building, by himself, his own chains. A sinner can ask for forgiveness, a corrupter forgets to ask.  Because? Because he no longer needs to go further, to look for paths beyond himself: he is tired but full of himself. Corruption has, in fact, caused a fatigue of transcendence, as indifference.


The identity and the path of the Church

Cardinal Turkson - as we understand from this dialogue that is evolving according to a precise itinerary - explores the various steps in which corruption [exisits], humanity's spirituality and social, cultural, political and even criminal; putting these aspects together on what is most touched upon: the identity and path of the Church. The Church must listen, raise and bend over the sorrows and hopes of people according to mercy, and must do so without fear of purifying itself, assiduously seeking ways to improve itself. Henri de Lubac wrote that the greatest danger for the Church is that of spiritual worldliness - thus corruption - which is more disastrous than the infamous leprosy. Our corruption is the spiritual elegance, the lukewarmness, the hypocrisy, the triumphalism, the only spirit to prevail in the world on our lives, the sense of indifference. It is with this awareness that we, men and women of the Church, we can take ourselves and suffering humanity, especially one that is oppressed by the criminal consequences and degradation generated by corruption.

As I write this, I am here in the Vatican, in a place of absolute beauty, in which human ingenuity has sought to elevate and transcend in an attempt to win the immortal over the fallen, the corrupt. This beauty is not a cosmetic accessory, but it something that puts the human person in the center so that it can uplift all the injustices. This beauty has to marry with justice. Thus, we must talk about corruption, denounce its evils, understand it, show the will to assert mercy towards meanness, curiosity and creativity towards the resigned weariness, the beauty towards nothing. We, Christians and non-Christians, are snow flakes, but if we united we can become an avalanche: a strong and constructive movement. Here is the new humanism, this renaissance, this re-creation against corruption that we can accomplish with prophetic audacity. We must all work together, Christians, non-Christians, people of all faiths and non-believers, to fight this form of blasphemy, this cancer that is wasting our lives. It is urgent to take notice of it, and this is why we need merciful education and culture, it requires cooperation on the part of everyone according to their own possibilities, their talents, their creativity.


Francis needs to look in a mirror and start with the blasphemies which come from his mouth, such as the Holy Trinity is always arguing but putting on a show of unity, which strike directly at the root of the Catholic Faith.
Posted by hereisjorgebergoglio at 11:37 AM