absurdity at its finest 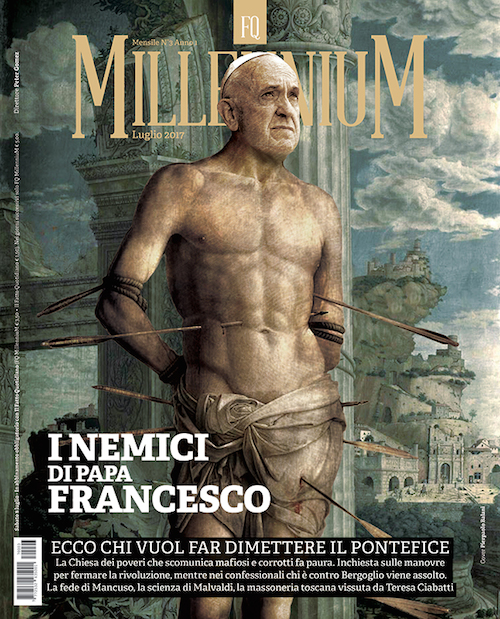 The July 2017 cover of FQ MillenniuM.

The enemies of Pope Francis

Here are those who want the pontiff to resign

The Church of the Poor that excommunicates the Mafiosi and the corrupt is afraid. An inquiry on maneuvers to stop the revolution, while in the confessionals those who are against Bergoglio are absolved. The faith of Mancuso, the science of Malvaldi, the Tuscan masonry lived by Teresa Ciabatti

(English translation of text on the cover)


While Il Tempo is presenting Francis and his revolution as a “big mess”, FQ MillenniuM is blaming parish priests for putting a stop to Bergoglio and his “revolution”.  Ersilio Mattioni writes that he went to confession in several Italian cities and was told by the priests to ignore Francis and everything that he says. The only time it matters what Francis says, according to these priests, is when he is speaking ex cathedra otherwise it’s just an opinion.  Perhaps these priest should read Leo XIII’s Epistola Tua, “Thus, it is an absolute necessity for the simple faithful to submit in mind and heart to their own pastors, and for the latter to submit with them to the Head and Supreme Pastor.” Regardless, this in addition to the blasphemous cover which portrays Francis as St. Sebastian, who was killed for admonishing the Roman Emperor Diocletian about his persecution of Christians, shows the Novus Ordo for the absurdity that it is.
Posted by hereisjorgebergoglio at 7:09 PM