All’s not well in Modernist Rome 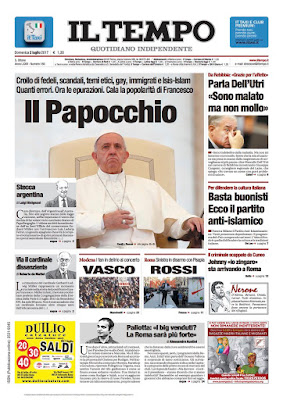 
The tagline above Francis’ picture reads, “Collapse of the faithful, scandals, ethics, gay, immigrants and ISIS-Islam How many errors. Now the purges. The popularity of Francis of collapses”.  The headline is, “Il Papocchio”, which is a play on words in Italian.  In 1980 a blasphemous film was released with the title ‘Il pap'occhio’ (literally - in the pope’s eye), this headline is an allusion to the film and the fact that even though Francis is popular with the mainstream medias he isn’t very popular among Italians.  The word ‘papocchio’ also translates into English as ‘mess’ being a regional colloquialism of the verb ‘impapocchiare’.  This is fitting as Francis has repeatedly told the youth to “make a mess” with their lives especially in their home dioceses.  After all, the chemist needs chaos in the Novus Ordo church so that he can reprocess it.  In the final stages of this alchemical transformation, chaos will be introduced several times, further refining the Novus Ordo into the Noahide church until the transformation is complete.  In this process, Francis is repeating the same behaviors he exhibited in Buenos Aires, Argentina where he alienated his flock and fellow countrymen with his reign of mistrust and lies.  As we wrote of in his time in Argentina and the people of Italy are coming to realize, Francis “is a man sick with power.”
Posted by hereisjorgebergoglio at 12:20 PM