Modernist rats scurrying about and fighting on a sinking ship

and at the funeral of Cardinal
Joachim Meisner no less...


Archbishop Georg Gänswein, the Prefect of the Papal Household for Francis and Personal Secretary of the Benedict XVI read the following message (see below) at the funeral of Cardinal Joachim Meisner from Benedict XVI.  Meisner was one of the four dubia cardinals of Amoris Laetitia fame.  Not to be outdone, Francis also had a message for the attendees at the funeral (which no one in the press paid attention to) read by Archbishop Nikola Eterovic.

At this hour, when the church of Cologne and faithful from further a field gathered to say goodbye to Cardinal Joachim Meisner, my heart and thoughts are with you also, and gladly accepting the invitation of Cardinal Woelki, I wish to address a word of remembrance to you.

When I heard of the death of Cardinal Meisner last Wednesday, I did not want to believe it. The day before we had talked on the phone. His gratitude for the fact that he had been on vacation after he had participated in the beatification of Bishop Teofilius Matulionis in Vilnius on Sunday before (June 25) was clear in his his voice. The love for the Church in the neighboring countries in the East, which had suffered under the Communist persecution, as well as the gratitude for the withstanding the sufferings of that time, shaped his life. And so is it is no coincidence that the last visit to his life was one to a Confessor of the Faith in those countries.

What particularly impressed me in that last talk with the retired Cardinal, was the loosened joy, the inner joy, and the confidence he had found. We know that this passionate shepherd and pastor found it difficult to leave his post, especially at a time in which the Church stands in particularly pressing need of convincing shepherds who can resist the dictatorship of the spirit of the age and who live and think the faith with determination. However, what moved me all the more was that, in this last period of his life, he learned to let go and to live out of a deep conviction that the Lord does not abandon His Church, even when the boat has taken on so much water as to be on the verge of capsizing.

Two things in recent times which pleased him more than anything:

When, on his last morning, Cardinal Meisner did not appear at Mass, he was found dead in his room. His Breviary had slipped out of his hands: he was praying as he died, looking at the Lord, talking to the Lord. The death that was given to him, shows once again how he lived: looking at the Lord and talking to him. So we can confidently recommend his soul to the goodness of God. Lord, we thank thee for the testimony of thy servant Joachim. Let him be intercessors for the Church of Cologne, and on the whole Be earthly! Requiescat in pace!


The chutzpah of Rabbi Ratzinger!  He sheds crocodile tears over the mess which he helped bring to fruition!  Benedict XVI when he was younger saw to it that a witch’s brew of chaos was put into effect during the Second Vatican Council.  This same chaos used to be his playground but now he fears it might be no more if it weren’t for the Lord!  What’s the matter, Benedict XVI?  Your fellow modernist Francis doesn’t like the smells-and-bells as much as you do? 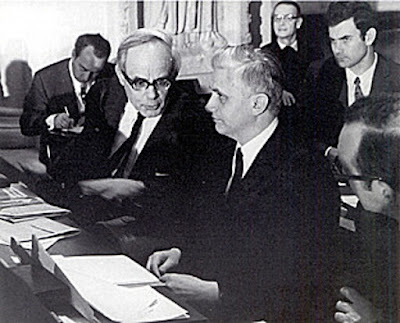 Fr. Joseph Ratzinger as a theological consultant at Vatican II helped create a huge mess.
Notice he is dressed in a coat and tie. This was before he learned to love smells-and-bells.

Things are going to be getting mighty interesting
when ‘humble’ Francis hears about this!

Posted by hereisjorgebergoglio at 9:15 PM