Francis spoke about ‘Amoris Laetitia’ in Colombia. Was it because the “Filial Correction” was weighing on his mind? 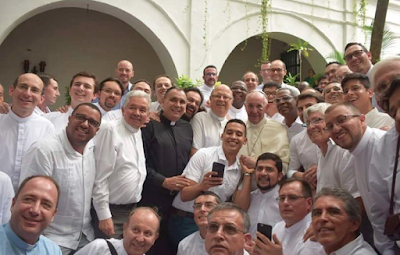 Francis meeting with his fellow revolutionary Jesuits in Colombia.


While in Colombia during his travels, Francis stopped the city of Cartagena de Indias, the capital of the region of Bolívar, on 10 September 2017.  After meeting the crowds of laity there, “he went into the inner courtyard where he met privately with representatives of the community of the Society of Jesus made up of 65 religious.”  A brief Question & Answer session transpired between Francis and the assembled Jesuits.  Even though none of the Jesuits present asked about Amoris Laetitia Francis felt the need to speak of it.


“I’ll use this question to say something else that I believe should be said out of justice, and also out of charity. In fact I hear many comments – they are respectable for they come from children of God, but wrong – concerning the post-synod apostolic exhortation. To understand Amoris Laetitia you need to read it from the start to the end. Beginning with the first chapter, and to continue to the second and then on … and reflect. And read what was said in the Synod.
A second thing: some maintain that there is no Catholic morality underlying Amoris Laetitia, or at least, no sure morality. I want to repeat clearly that the morality of Amoris Laetitia is Thomist, the morality of the great Thomas. You can speak of it with a great theologian, one of the best today and one of the most mature, Cardinal Schönborn.
I want to say this so that you can help those who believe that morality is purely casuistic. Help them understand that the great Thomas possesses the greatest richness, which is still able to inspire us today. But on your knees, always on your knees…”


Wow!  The five dubia and “Filial Correction” must have been grating Francis’ nerves for him to bring this topic up.  Then Francis proceeds to tell his audience that Amoris Laetita is Thomistic!  This from the mouth of the same man who told another fellow Jesuit (Michael Rogers) in 2014 that, “Studying fundamental theology is one of the most boring things on earth.”  Everyone who follows the Vatican closely know that Francis perverted buddy, ‘Smoochie’ Fernandez ghostwrote Amoris Laetitia and anyone who has read St. Thomas Aquinas and Amoris Laetitia understands that not only does it distort St. Thomas, it uses his writings to support an unsound point as well as suggesting things contrary to St. Thomas (see Amoris Laetitia, #301).  Fernandez reminds us of the bible-nullifying Talmudic rabbis.  Francis next has the audacity to recommend speaking with “a great theologian”, Cardinal Schönborn!  Here’s what Francis had to say about Schönborn last year,


“I can say yes, period. But it would be an answer that is too small. I recommend that you read the presentation of Cardinal Schonborn, who is a great theologian. He was the secretary for the Congregation of the Doctrine of the Faith, and he knows the doctrine of the faith well. In that presentation, your question will find an answer.”


The presentation which Francis mentions, (can be read here) answers how Amoris Laetitia should be interpreted concerning the question of sacraments for those in “so-called irregular situations” (hint: communion for all).  This shouldn’t be a surprise as the zionist, Christoph Schönborn, “is a descendant of old nobility of the Holy Roman Empire known for its sheltering of usurers, rabbis, intelligencers and the Talmud itself (see: Judaism Discovered) and peddling of alcohol on credit via Judaic front-men to the poorest of Christian peasants.”  The Schönborn family are experts at keeping “the Christian common folk as mystified, dumbed down, docile sheep for shearing by themselves and their fellow rabbi and banker mobsters.”  Essentially, the freemason Cardinal Schönborn is carrying out what his family has done for centuries.  Lastly, Francis mentions getting down “on your knees” ostensibly to pray to God.  Have you ever seen Francis on his knees in prayer?  We at Call Me Jorge... can only recall him getting on his knees once to pray at Palm Sunday Mass, usually he is kneeling to do things such as wash transgenders feet on Maundy Thursday or receive blessings from people.

Why the four dubia cardinals (Caffarra, Burke, Brandmuller, and Meisner) felt the need to have their confusion concerning Amoris Laetita clarified when Francis through his actions and words clearly explains how it is to be implemented leads us to conclude that they are members of a limited hangout.

Why the 146 ‘scholars’ felt the need to sign the “Filial Correction on Account of the Propagation of Heresies” when the document itself is in need of massive corrections leads us to conclude it is an empty act of virtue signaling done for the benefit of the few conservatives left in the Novus Ordo.

Why Francis felt the need to bring this matter of Amoris Laetita up in an off-the-cuff Q & A in Colombia demonstrates how fragile his ego is.

As we have written before, “Things continue to become more and more interesting at the chaotic Vatican!” 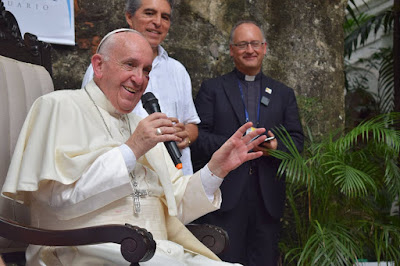 Francis loves to blather, no matter how banal or un-Catholic his message is.

Posted by hereisjorgebergoglio at 5:56 AM