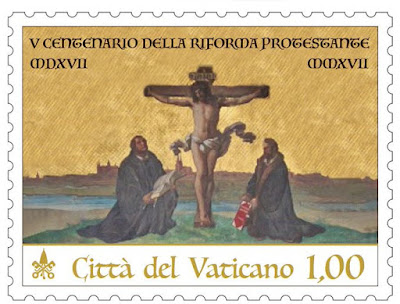 Wow! The Vatican honors two heretical men, Martin Luther and Philipp Melanchton, on the 500th anniversary of Martin Luther’s nailing 95 theses to the door of All Saints’ Church in Wittenberg, Germany (October 31st, 1517). The stamp (see above) depicts Luther and Melanchton at the foot of the Cross at Our Lord’s Crucifixion as if they were faithful sons of Our Lord and of the Church He instituted! How can this be the same Church that condemned Luther’s errors in 1520 and excommunicated him in 1521?

Zenit writes of the new issue,


“The postage stamp issued by the Philatelic Office for the occasion depicts in the foreground Jesus crucified and in the background a golden and timeless view of the city of Wittenberg. With a penitential disposition, kneeling respectively on the left and right of the cross, Martin Luther holds the Bible, source and destination of his doctrine, while Philipp Melanchthon, theologian and friend of Martin Luther, one of the main protagonists of the reform, holds in hand the Augsburg Confession (Confessio Augustana), the first official public presentation of the principles of Protestantism written by him.”


Symbolically, this stamp is stating that Martin Luther’s condemned 95 theses are correct as well as the Augsburg Confession  — that Our Lord is in agreement with the two heresiarchs, Luther and Melanchton.  To have the nerve to replace the Blessed Mother and St. John at the foot of the Cross with the two heresiarchs takes chutzpah!  These are people who denied the presence of Our Lord’s Body and Blood for Melanchthon said, “Christ instituted the Eucharist as a memorial of His Passion. To adore It is therefore idolatry” and Luther, “It is, therefore, clearly erroneous and impious to offer or apply the merits of the Mass for sins, or the reparation thereof, or for the deceased. Mass is offered by God to man, and not by man to God.”  It also a sign that these Protestants and the Revolt they led away from the Church is part of the sacrifice of the Cross!  And to put Wittenberg, the infamous place where Luther’s movement started, in the background is another mocking jest that only the wicked would take delight in!

Simultaneously with the issue of the stamp many Novus Ordo churches had joint services with Lutherans marking the anniversary.  Below is video of one of these services in the Cathedral of St. Michael and St. Gudula in Brussels, Belgium which was interrupted by a few young Catholics who were saying a Rosary to Our Lady because of the atrocious joint celebration taking place.  Notice the police come and cart them away one by one.  Who called the police?  One of the Cathedral’s prelates!  When Francis told the youth to “make a mess” and cause “trouble” in “their dioceses” he didn’t mean for one to practice the Catholic Faith.


The Pontifical Council for Promoting Christian Unity also issued a Joint Statement with the Lutheran World Federation for the Conclusion of the Year of the Common Commemoration of the Reformation, 31st October 2017.  It begins by stating,


“we are very thankful for the spiritual and theological gifts received through the Reformation, a commemoration that we have shared with and with our ecumenical partners globally.”


And as if that isn’t bad enough states a little later that Lutheran-Novus Ordo commemoration is,


“[a] pilgrimage, sustained by our common prayer, worship and ecumenical dialogue,”


This document concludes with these gems,


“Again, it has become clear that what we have in common is far more than that which still divides us.”

“Looking forward, we commit ourselves to continue our journey together, guided by God's Spirit, towards the greater unity according to the will of our Lord Jesus Christ.”


Does this sound Catholic to your ears or Protestant?


Two stamps fitting of the heretic Martin Luther and his revolt 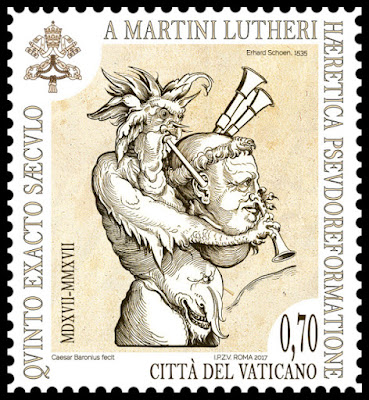 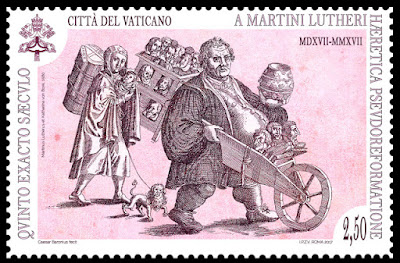 We will conclude this post with an observation.  Francis is an occultist.  In the Renaissance, occultists/alchemists were obsessed with two things: 1) the unity of opposites; and 2) the law of inversion.  Here we have Francis trying to alchemically unify two opposites — the Catholic Church & the Lutheran churches — as well as invert the teachings of Our Lord Jesus the Christ — through the issuance of the stamp.  This should come as no surprise from the man who has already inverted the hierarchy of the church, celebrated Martin Luther on the 99th anniversary of the sixth apparition of the Blessed Virgin Mary at Fatima, and is actively seeking to invert the Sacrament of Marriage.  It’s fitting all this is also happening on the secular holiday of Halloween which glorifies the hideous and wicked while inverting the Vigil of All Saints’ Day, with its fast and abstinence, as children gorge themselves on candy and adults drink alcohol to excess.  What more perverts the Feasts of All Saints’ Day and All Souls’ Day and the holy religious activities that surround them than Francis and his behavior? 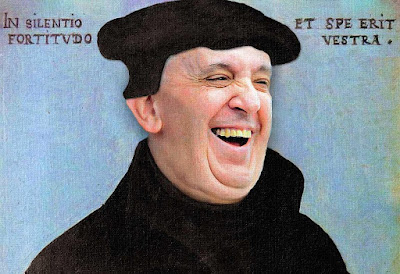 Francis the chemist fittingly dressed as Martin Luther for
Halloween and laughing at the macabre joke he pulled off.

Posted by hereisjorgebergoglio at 3:22 PM