Francis the humble contradicts himself again at today’s general audience


Francis favorite things to do in life are eat and talk.  He is constantly blathering away about encounter, dialogue, and listening but as usual he never listens to the words that leave his motor mouth.  At today’s general audience in St. Peter’s Square Francis said the following,


“Just think: when you go to Mass, there is the Lord! And you’re distracted. But it is the Lord! We have to think about this. ‘Father, it’s that the masses are boring’ - ‘But what you are saying is, that the Lord is boring?’ - ‘No, no, no, it’s the priests’ - ‘Ah, then convert the priests, but it is the Lord who remains there!’.  Got it? (Do you understand?) Do not forget it.”


What we draw from Francis’ words is that the Novus Ordo Missae is boring because of the priest performing the service. These presbyters make the Novus Ordo Missae boring because they do not believe.  In other words they need to put more enthusiasm into their performances because they don’t appear to the laity to believe that transubstantiation is occurring!


So a few breaths later, Francis shares this contradictory gem,


“Or, because at some point the priest who presides over the celebration says, ‘Lift up our hearts?’ He does not say, ‘Lift up our phones to take photos!’ No, it’s a bad thing! And I tell you that it gives me so much sadness when I celebrate here in the Piazza or in the Basilica and I see so many raised mobiles (cell phones), not just of the faithful, but even of some priests and bishops too. But please! The Mass is not a show...”


You have to be kidding... the Novus Ordo Mess isn’t a show?

Didn’t he just criticize his priests for making the Novus Ordo Missae boring?

Who can forget Francis’ letter to the nine year old boy Alessio where Francis told the boy that when he (Jorge Bergoglio) was a young boy, “for fun we’d do imitations of the priest, messing up the words a bit to make up weird sayings in Spanish. We had fun, and we really enjoyed serving Mass.”  For Francis the Novus Ordo Mess isn’t a spectacle but it’s perfectly fine to make a mockery of the Tridentine Latin Mass.  After all, Francis told the Bishops of the Czech Republic that the Tridentine Latin Mass, “is rather a kind of fashion.”  Let that sink in, the Christ-instituted Tridentine Latin Mass “is a fashion”.

This isn’t a show or spectacle so please,
no phones taking video or photos! 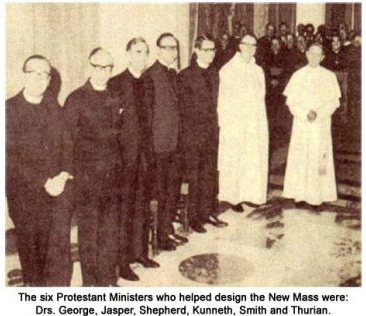 Even though it’s a little more complicated, it suffices to say that these men were
instrumental in helping create the Novus Ordo Missae which was instituted
by men not by Jesus the Christ.

Francis wants you to move along as there’s nothing
to see, no spectacle here at his messes!

Earlier in his catechesis on the Novus Ordo Mess,


“Vatican II was strongly animated by the desire to lead Christians to understand the greatness of the faith and the beauty of the encounter with Christ. For this reason, it was necessary first to implement, with the guidance of the Holy Spirit, an adequate renewal of the liturgy, for the Church continually lives and renews itself thanks to it.”


Where does he come up with this crap?

Francis the humble modernist offers a simple solution to the problem of the loss of faith,


“It is very important to go back to the foundations, to rediscover what is essential, through what is touched and seen in the celebration of the Sacraments.” 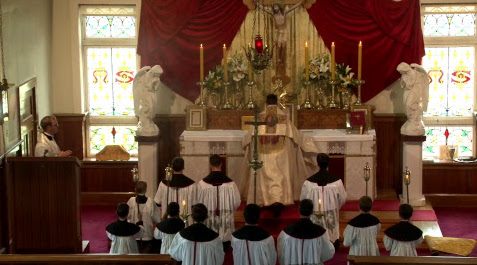 A return to the Christ-instituted Tridentine Latin Mass with
validly ordained priests is what Francis and company fear most.

Posted by hereisjorgebergoglio at 9:55 AM