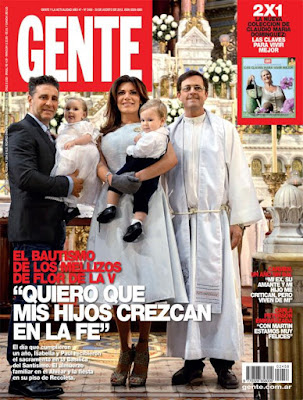 On the Gente magazine cover, from 30 August 2012, from left to right are: Pablo Goycochea, Roberto Carlos Trinidad, and Fr. Jorge Ignacio Garcia Cuerva.  The occasion was the baptism of the two children, who were born of a surrogate mother for Pablo and Roberto.  Fr. Jorge Ignacio Garcia Cuerva is the pastor of the Church of St. Clare of Assisi in the Talar de Pacheco, Tigre and is famous for its fight against drugs in Argentina.  The baptism happened at the Basilica of the Most Holy Sacrament, in Buenos Aires, Argentina on 25 August 2012.  Roberto Carlos Trinidad, better known under the names, Florencia De La V or Florencia Trinidad, is an Argentinian TV star.  He is also a man who has undergone surgery in order to look like a woman.  The reason for the baptism was given by Fr. Jorge Ignacio Garcia Cuerva as follows,


“Florencia approached us with the explicit request of the Catholic Church to baptize their children under Canon Law. That there is that desire is reason enough to carry it out. I wish all parents (would) bring their children to baptism with this level of consciousness. I can see Florencia and Pablo really want to convey to Pablo and Isabella faith in Jesus.”


How are these two poor children ever going to be raised in the Catholic faith when they have two perverted pseudo-parents who are biological males that are carrying on as if they husband and wife?  It’s obvious that Fr. Jorge Ignacio Garcia Cuerva doesn’t understand what sin is much less what the sins that cry to heaven for vengeance are!

Not only did the perverse couple and Fr. Jorge Ignacio Garcia Cuerva make the cover of a magazine for the baptism, they also made national news on Argentinian television!

So did Cardinal Bergoglio reprimand Fr. Jorge Ignacio Garcia Cuerva for this act?

A little over five years later...

He rewarded Fr. Cuerva with his own titular see! 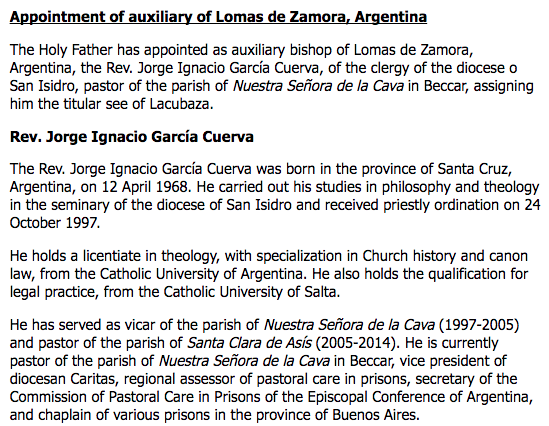 
Put on your faux* surprise face! 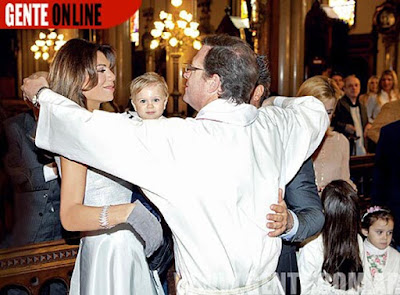 The apple doesn’t fall far from the tree!

*Readers of this blog will know that one of Francis’ favorite past-times is inversion of the natural and spiritual.

Posted by hereisjorgebergoglio at 11:45 PM