Malachi Martin would be proud


Malachi Martin once said, “As you know it's theologically possible for God to have become a cow if he decided. He could be incarnated in a cow. But even if he had been incarnated in a cow, we men would have taken over, that's the extent.” 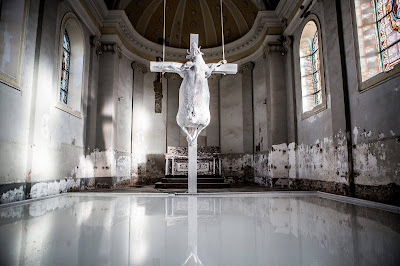 Occultist, Tom Herck’s Holy Cow inside the church of Saint John
the Baptist of Kuttekoven in Borgloon, Belgium.

“Local Catholics in a Belgian town are outraged as a cruciform cow has been erected as art at the center of a consecrated Catholic church. They are urging the local bishop to have it removed and offer public prayers of reparation.

The “art” exhibit by Tom Herck is to be displayed until early December in the small parish church of Saint John the Baptist of Kuttekoven, in the Flemish town of Borgloon.

The “artist” went through the grueling process of actually nailing the 500 kg corpse of a cow to a cross before covering it with silicone paint: it is the resulting mold that hangs, “crucified” in the center of the church as a sneering mockery of one of the most sacred images of the Catholic faith: that of the crucified God and Saviour of mankind.

In contemporary art, by far the most important part of an opus resides in the “discourse” – or, more appropriately, gibberish – that surrounds it. The installation in Borgloon, Tom Herck is happy to explain, aims to make a stand against modern wastefulness. The cow on the cross, surmounting a basin containing 5,000 litres of milk, is supposed to symbolize industrial breeding and thrown-away food. Visitors are welcomed with beef and cheese appetizers.

The choice of a church supposedly points to wasted architectural space in a time of housing shortage. Herck openly admits he is particularly seeking to attract attention to the “innumerable” churches that remain empty in Flanders on Sundays because, he says, the Flemish are no longer interested in “insufferably tedious Masses.”

Katholiek Forum say the local diocese has been slow to act on the blasphemous installation in the church of Saint John the Baptist, which has never been deconsecrated and where religious services are still held. They say the “crucified cow” is a “satanic image and a disgusting insult to God and Catholicism.”

“We are disappointed by Patrick Hoogmartens. He has done nothing against this self-styled work of art because he wants to avoid confrontation. He is terrified by the media. That is why we came to pray here, because Catholicism has been dishonored,” said Dries Goethals.

Shortly after the installation was opened to the public at the beginning of the month, the diocese of Hasselt published this reaction as its sole response:

The diocese of Hasselt is astonished at the ‘Holy Cow’ exhibition in the church of Kuttekoven. We are always ready to collaborate in dialogue with art projects in a church, and we can certainly appreciate humor. But a cow on the cross, on the spot where Christ hung on the cross, that is to our mind really a bridge too far. Transformation is a trend in the art world. Deep symbolism, such as that of the cross, cannot however receive another meaning just like that. That can be hurtful or come across as a will to ridicule. Even though the church of Kuttekoven is soon to be deconsecrated, we find this way of changing its destination unbecoming. Or should we perhaps today consider certain forms of art as the ‘holy cow’?


The statement was published on November 7 and was not followed by any form of action on the part of the Catholic diocese of Hasselt to put an end to the defilement of the image of the crucified Christ in a church that, to LifeSite’s knowledge, still belongs to it. If not, similarly to other religious buildings that are property of the State in Belgium, the Catholic Church at least has full sovereignty over its use. ”

the locals are fed up with this blasphemy
Posted by hereisjorgebergoglio at 3:03 PM