There's a reason why certain circles refer to Francis as “Chaos Frank!” 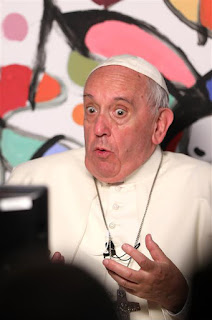 
Jorge Mario Bergoglio is unquestionably an innovator. But in method, before it can be seen in results.

He always introduces the innovations in little doses, on the sly, perhaps in an allusive footnote, as he did with the now-famous footnote 351 of the post-synodal exhortation “Amoris Laetitia,” only to say later with candor, when questioned on one of his equally famous airborne press conferences, that he doesn’t even remember that footnote.

And yet those few cryptic lines were enough to ignite within the Church an unprecedented conflict, with entire episcopates squaring off, in Germany in favor of the innovations and in Poland against, and so all over the world between diocese and diocese, between parish and parish, where what is at stake is not only the yes or no to communion for the divorced and remarried, but the end of the indissolubility of marriage and the admission of divorce within the Catholic Church too, as is already taking place among Protestants and Orthodox.

There are those who are becoming alarmed over this confusion that pervades the Church. But Francis is doing nothing to put the house back into order. He is moving right along with confidence. No point in even waving to the cardinals who submit their own “doubts” and those of many to him, on capital questions of doctrine that they see under threat, and ask him to bring clarity. He lets run free the most disparate interpretations, whether conservative or progressive in the extreme, without ever explicitly condemning any of them.

But this is precisely what the first Jesuit pope in history is doing today: setting into motion “processes” within which he is sowing the innovations that he wants to win out sooner or later, in the most diverse fields, as for example in the judgment on Protestantism.

In Argentina, Bergoglio unleashed terrible invectives against Luther and Calvin. But as pope he is doing the complete opposite, he does nothing but sing Luther’s praises. On a visit to the Lutheran church in Rome, when asked to say whether Catholics and Protestants may receive communion together in spite of the fact that the former believe that the bread and wine “really” become the body and blood of Christ while the latter do not, he answered yes, and then no, and then I don’t know, and then figure it out yourselves, in an ecstasy of contradictions, but in practice giving the go-ahead.

It is the fluidity of his magisterium that is the true novelty of Francis’s pontificate. What he does not tolerate is that anyone should dare to tie it down in clear and distinct ideas, purging it of its innovative contents.


More confirmation on who Jorge Mario Bergoglio truly is — an agent of change, who reigns with confusion. 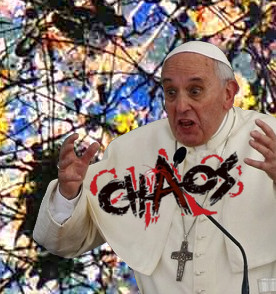