Why doesn’t Francis just go ahead and declare Judas a saint? 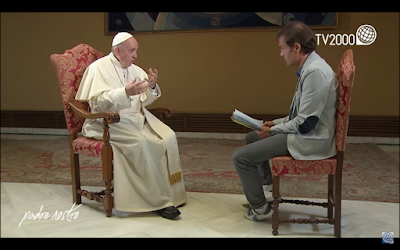 The man in sneakers and the clothes of a layman interviewing
Francis is Marco Pozza and he is a priest.

Francis is back at it again with one of his favorite pet projects, the rehabilitation of Judas.  We previously covered Francis and Judas in two posts on Call Me Jorge... :


Francis has a soon to be released book, Padre Nostro, with Don Marco Pozza that is being published simultaneously with a television series also titled, Padre Nostro, airing on TV2000it.  Here’s part of the excerpt published by Il Corriere della Sera newspaper on 23 November 2017 and translated into English by Aleteia.


The third case, “the one that moves me most, is Judas’ shame,” the pope said.

“Judas is a difficult character to understand; there have been so many interpretations of his personality. In the end, however, when he sees what he has done, he turns to the ‘righteous,’ to the priests: ‘I have sinned: I handed over an innocent man to be killed.’ They answer him: ‘What does that matter to us? That’s your affair.’ (Matthew 27:3-10) Then he goes away with that guilt that suffocates him.”

The Pontiff invites us to imagine a different fate for Judas: “Perhaps if he had met the Virgin Mary, things would have gone differently, but the poor man goes away, doesn’t find a way out of his situation, and he went to hang himself.”

“But, there’s one thing that makes me think that Judas’ story doesn’t end there … Perhaps someone might think, ‘this pope is a heretic…’ But, no! They should go see a particular medieval capital of a column in the Basilica of St. Mary Magdalen in Vézelay, Burgundy [in France],” he said.

The Successor of Peter describes how people in the Middle Ages taught the Gospel through sculptures and paintings. “On that capital, on one side there is Judas, hanged; but on the other is the Good Shepherd who is carrying him on his shoulders and is carrying him away.”

He revealed that he has a photograph of that two-part capital behind his desk, because it helps him meditate. “There is a smile on the lips of the Good Shepherd, which I wouldn’t say is ironic, but a little bit complicit,” he describes.

“There are many ways of reacting to shame; one is to despair, but we must try to help despairing people to find the true path of shame, so they don’t go down the path that put an end to Judas’ life.” 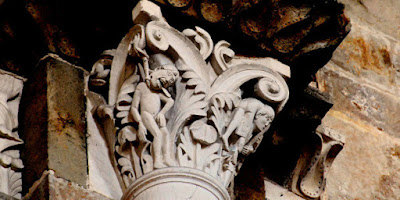 Francis has a photo of this column behind his desk.


First off Francis is projecting the profane ideas of Fr. Primo Mazzolari onto this pillar of Basilica Sainte-Marie-Madeleine in Vézelay, Burgundy, France.  The late Fr. Primo Mazzolari gave a sermon on Holy Thursday in 1958 titled, Nostro Fratello Guida (Our Brother Judas) and Francis in the above quoted interview is regurgitating blasphemous ideas from it.  In our research and also according to the University of Pittsburgh’s Vézelay Abbey website one reads, “On the left side of the capital a man carries Judas's body over his shoulder.”  No mention about Jesus the Christ being the man carrying Judas!

Next in the interview Francis says, “There is a smile on the lips of the Good Shepherd, which I wouldn’t say is ironic, but a little bit complicit.”  What!?  Complicit is defined by Merriam-Webster as, “helping to commit a crime or do wrong in some way”.  Not only has Francis projected Christ onto the pillar falsely, now he is implicitly stating that Our Lord, Jesus the Christ is a sinner!

What are the words of Jesus the Christ concerning Judas?


“The Son of man indeed goeth, as it is written of him: but wo to that man, by whom the Son of man shall be betrayed: It were better for that man if he had not been born. And Judas, that betrayed him, answering, said: Is it I, Rabbi? he saith to him: Thou hast said it.” (Matthew 26, 24-25)


Doesn’t sound as if Judas was receptive to the Mercy Our Lord had for him does it?

Why is Francis trying to rehabilitate Judas then?

Keep in mind, Francis meditates on this blasphemy when he is in his office.

Does Francis remind you of anyone as he nullifies the words of God?

To us at Call Me Jorge..., he is most definitely sounding and behaving like a Talmudic rabbi.

Not to worry though as Francis assures you he isn’t a heretic! Even though Call Me Jorge... has asked this question before, we ask
it again — Does Francis see himself as a modern day Judas Iscariot?


A video in Italian of Francis addressing the priests of his diocese where he discusses Judas, the column, Fr. Primo Mazzolari, and how Jesus is dirty. (click here for English transcript)
Posted by hereisjorgebergoglio at 9:41 AM