A Pharisaic ‘Christmas’ — First night of Chanukkah celebrated in the Vatican


The prelates at the Vatican are preparing themselves for the Feast of the birth of Our Lord by joining ranks with those whose very traditions viciously mock Our Lord, Jesus the Christ.  We have written extensively on Hanukkah on this blog (see links at the bottom of this entry) and will excerpt some of the research for those not familiar with this rabbi created fable of Judaic racial supremacy.

The Chanukah 'miracle of the oil' has its origin in Talmud tractate Shabat 21b and is generally accepted as originating 600 years after the events recorded in Book of Maccabees. Numerous rabbinic scholars have determined that the fable was invented at a time when militant Judaism would be a liability (c.f. the Bar Kochba rebellion), and so the 'miracle of the oil' was contrived and emphasized over the militant theme in the Book of Maccabees to mollify fanatics and thereby avoid backlash. This is an example of Judaic dispensationalism at work.  (source: Maurice Pinay, For Advent, 'The Remnant' Offers 'Hope' in Rabbinic Fables)


According to the Talmudic Jews, the menorah symbolizes the wisdom of the Talmud and the light it shines on the world of darkness. The blasphemous Talmud, “illuminates the path to a spiritual, meaningful and fulfilling life.” Not only does it symbolize that but also the “indestructibility” of the Talmudic Jews who “are the constant light that never went out!” (source: Call Me Jorge..., The Menorah exhibit — “the emblem of Judaism par excellence” “in the heart of the Vatican”)


The arcane traditional doctrine of Chazal (i.e. the “sages” of the Talmud) concerning Hanukkah is that it commemorates God’s “delight in the Jewish people” themselves, and their vainglorious celebrations. The secret teaching of Hanukkah is that God supposedly provided a mythical eight days of oil not as a means of facilitating a victory, or of guaranteeing the successful completion of a sacred duty, but rather as a sign (halacha osah mitzvah), of His continuing adoration of the Judaic people, which all the rest of us are supposed to emulate, as we do indeed whenever a menorah is erected where a Nativity scene is banned. (source: Revisionist Review, The Hanukkah Hoax and Hatred for Christmas)

The Vatican bureaucrats celebrate the light darkness of the blasphemous Talmud and the indestructibility of those who follow its words on Vatican property, this Advent.  It’s a total mockery of Our Lord, Jesus the Christ, and everything He represents.  The only thing missing was Francis himself.  Some questions we have at Call Me Jorge... are:  Will conservative kosher catholics offer lessons about Hannukah this year?  Will they declare the Channukah celebration in the Vatican walls a masterstroke?  Decry it?  Or simply ignore it? 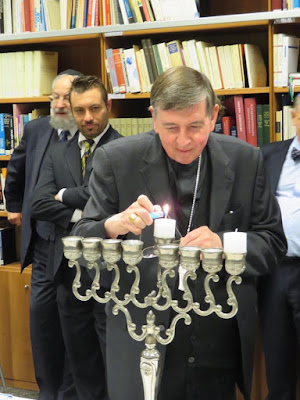 An unusual group of visitors were received this past week in various Vatican offices. Encounters took place between members of IJCIC, the International Jewish Committee for Interreligious Consultations, and top Vatican officials including: Cardinals Parolin and Gallagher, respectively Secretary of State and Secretary of Relations between States; Cardinal Koch and Fr. Norbert Hofmann, respectively President and Secretary of the Pontifical Commission for Religious Relations with Jews; Cardinal Ladaria Ferrer Prefect of the Congregation for the Doctrine of the Faith; Cardinal Turkson, President of the new Dicastery for the Promotion of Integral Human Development; Msgr. Viganò, Director of the new unified Communications Department (Secretariat) and Greg Burke, the Vatican Pressroom Spokesperson.

IJCIC is an umbrella body for representative Jewish organizational leaders committed to engaging in interreligious dialogue. It was created in 1970, in response to the launch of “Nostra Aetate”, the watershed 1965 Vatican II document on Catholic - Jewish and interreligious relations that changed the course of a long and often painful history.

IJCIC, meant to be as representative of world Judaism as possible, is composed among others, of the American Jewish Committee (AJC), the Anti-Defamation League (ADL), B’nai B’rith International, the World Jewish Congress (WJC), and delegates of the major branches of Judaism today -- the Orthodox, Conservative, and Reform/Liberal movements, organized this special trip to Rome around the Jewish Hannukah holiday, to refresh communication with the most significant Vatican leaders in the various departments of the Holy See, at the offices of the central world government of the Roman Catholic Church.

Last week’s Vatican meetings concluded with a happy, inclusive moment of a celebration of Hannukah. This special ceremony sealed two days of fruitful meetings. Within the library of the Pontifical Commission for Religious Relations with Jews on Via della Conciliazione 5, Israel’s present Ambassador to the Holy See, Oren David, led a Hannukah candle - lighting ceremony with prayers, songs, and a table of excellent kosher refreshments that were enjoyed by the delegates and guests of the Vatican, the Jewish community, and the Israeli Embassy. Cardinal Kurt Koch and Father Norbert Hofmann (affectionately nicknamed “the rabbi of the Vatican”), plus Pontifical University officials, Catholic scholars, Vatican journalists and friends of “the Dialogue”, mingled with Italian and Rome Jewish Community representatives and the IJCIC delegates.

A modern and comparatively brief flashback of only two decades in our times clearly reveals a notable precedent for this year’s celebrations in terms of the prospering Catholic-Jewish friendship. On the first evening of Hannukah in December, 1997, a Hannukah lighting ceremony took place in the Vatican Gardens, in the presence of Cardinal Cassidy and Cardinal Tauran, at the time an Archbishop who served as the Vatican State Department's Secretary of Relations between States (or, colloquially, the Vatican's "Foreign Minister"); of Aharon Lopez, the then Ambassador of Israel to the Holy See; Israel's Minister for Religious Affairs; Tullia Zevi, President of the Union of Italian Jewish Communities (UCEI) and Yours Truly, (among others.) Thus, exactly 20 years later, the Vatican again hosted a joint Catholic-Jewish celebration of Hannukah within its walls.


At the end of an intensive schedule of consultations and discussions with senior Vatican officials, the delegation of the International Jewish Committee for Interreligious Consultations (IJCIC) met in the Pontificate Library for candle lighting, latkes, donuts and conversation.

Cardinal Kurt Koch, the President of the Pontifical Council for Promoting Christian Unity, who had been the final speaker on the formal IJCIC programme, then spoke at the celebration on the theme of how Catholics and Jews each spread light through good works, and how the light is magnified when we work together.

source: J-Wire, Chanukah in the Vatican 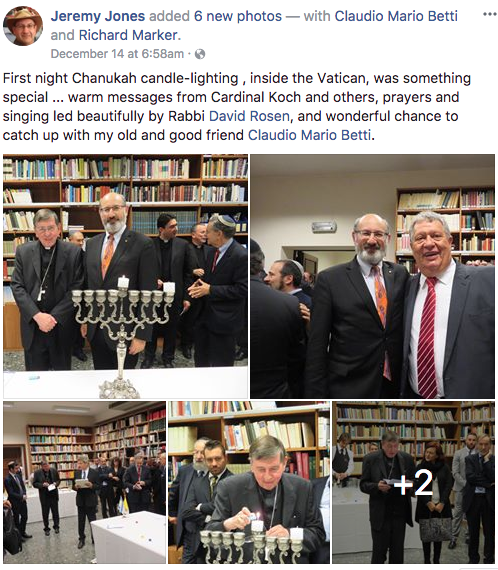 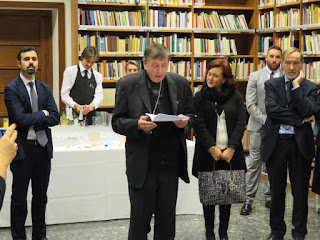 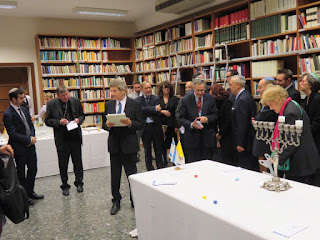 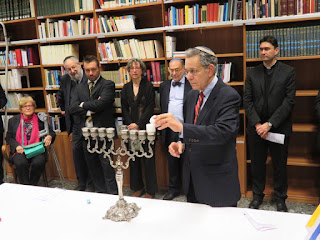 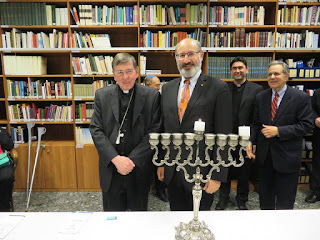 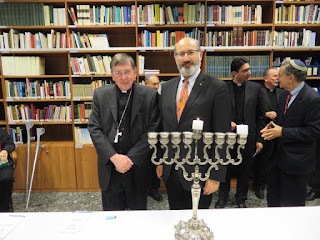 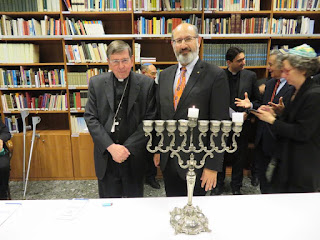 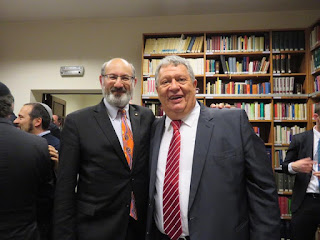 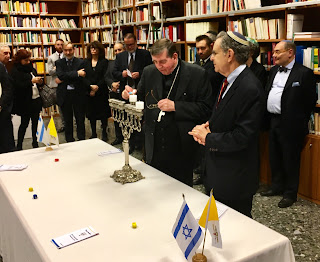 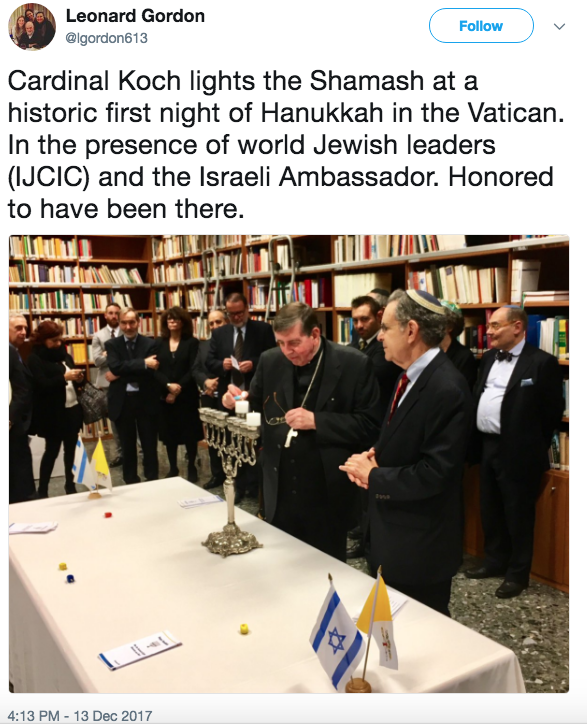 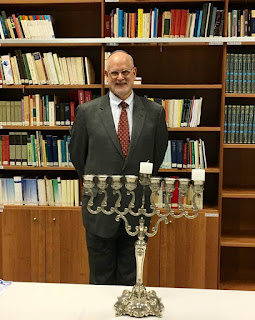 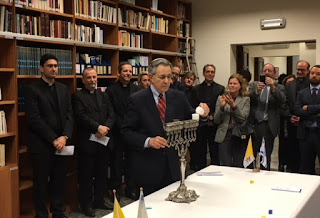 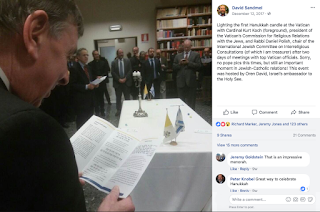 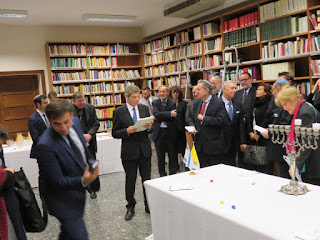 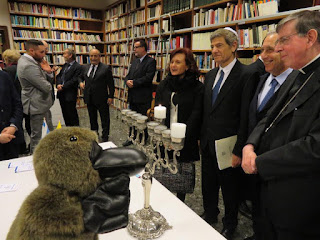 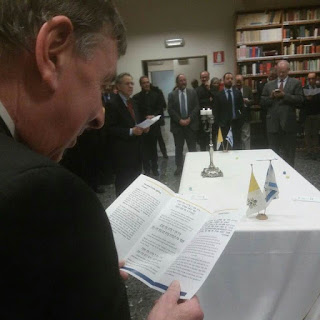 Posted by hereisjorgebergoglio at 8:50 AM