Keep in mind as you peruse through the video above that Francis said of Schönborn,


“[He] is a great theologian. He was the secretary for the Congregation of the Doctrine of the Faith, and he knows the doctrine of the faith well.”


The faith which Francis speaks of isn’t the Catholic faith, for nothing in Schönborn’s behavior even comes close to resembling Catholicism.  There’s a simple reason for this, both Francis and Schönborn are modernists.


“This shouldn’t be a surprise as the zionist, Christoph Schönborn, “is a descendant of old nobility of the Holy Roman Empire known for its sheltering of usurers, rabbis, intelligencers and the Talmud itself (see: Judaism Discovered) and peddling of alcohol on credit via Judaic front-men to the poorest of Christian peasants.”  The Schönborn family are experts at keeping “the Christian common folk as mystified, dumbed down, docile sheep for shearing by themselves and their fellow rabbi and banker mobsters.”  Essentially, the freemason Cardinal Schönborn is carrying out what his family has done for centuries.”

source: Call Me Jorge..., Francis spoke about ‘Amoris Laetitia’ in Colombia. Was it because the “Filial Correction” was weighing on his mind?


Many would object to the above quoted observation of the Schönborn family and say that  Cardinal Christoph Schönborn is different from them.   That he is a conservative.  NovusOrdoWire has documented more instances of Schönborn’s support and advocacy of sodomy.

“This is the same Schonborn, by the way, who overturned a pastor’s decision barring an openly-practicing sodomite from sitting on the parish council, and who has encouraged and participated in the wildest liturgical chaos imaginable (yes, including flame throwers, pornography, and stage diving — we are NOT kidding!). This is also the same Schonborn who allows his cathedral rector to give “blessings” to homosexual “couples” every year on St. Valentine’s Day, and who allowed an open atheist, Communist, sexual deviant, and blasphemer to exhibit his “artwork” that displayed the Last Supper as a homosexual orgy, right there in the cathedral’s museum. To top it off, Schonborn later granted, through his cathedral rector, a “Catholic” (i.e. Novus Ordo) burial to the Communist blasphemer, complete with a red casket and a pornographic sculpture for a tombstone (see video here). Schonborn is also on record lauding as “exemplary human behavior” sodomite couples who “faithfully care” for one another.

Let’s face it: “Cardinal” Schonborn is satanic, and this “homo liturgy” he just conducted in the cathedral of Vienna is simply the latest offense in an ever-growing heap of crimes against the Most Holy Trinity, the saints, and the souls our Blessed Lord came to save.”


There’s a reason that Dante Alighieri put blasphemers, sodomites, and usurers together in the seventh circle of hell.  They are all unnatural and sterile actions.  They are all inversions.  Sadly, Schönborn has all these sinful qualities in spades and he is leading the pewsitters entrusted to him down the road to perdition. Christ said in the Gospel of Matthew 7, 15:

“Beware of false prophets, who come to you in the clothing of sheep, but inwardly they are ravenous wolves.”


Christoph Schönborn is nothing other than a rabbi/banker in bishop’s clothing. 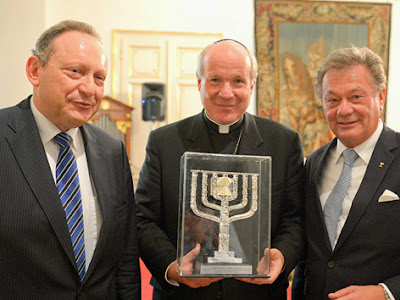 Schönborn receiving an award for all the souls he has led and is leading astray.
Posted by hereisjorgebergoglio at 2:40 AM