Francis receives a tongue lashing from a Cardinal

‘We elected you to make reforms, not to destroy everything.’ 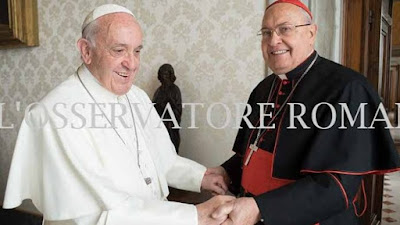 Francis had a private audience with this cardinal
three days after the incident was reported in the media.


Last Friday, Italian Marco Tosatti reported on his blog (bold is ours for emphasis),


“And, if what we have learned from two different sources is true, perhaps it is an annoyance also shared in the Vatican. A cardinal of great renown, an ex-diplomat, and one with an important curriculum as the head of Congregations and other important offices in the Secretariat of State, has reproached the Pope for his actions, saying in essence: ‘We elected you to make reforms, not to smash (destroy) everything.’ The news spread itself around the Vatican because the conversation, if it can be called a conversation, took place at high decibel levels, which overwhelmed the fragile barrier of the doors and the walls. The cardinal in question was one of those who supported the candidacy of Jorge Mario Bergoglio in the conclave of 2013.”


Today the German website, katholisches.info, identified the mystery cardinal as none other than Francis’ fellow countryman,


“Francis received his compatriot Leonardo Cardinal Sandri. The cardinal, born like Francis in Buenos Aires, is the son of Italian immigrants but seven years younger than the pope. Ordained priest in 1967, he was secretary to the then Archbishop of Buenos Aires and sent to Rome in 1971 to attend the Diplomatic Academy of the Holy See. He joined the State Secretariat in 1974 and served as Apostolic Nuncio in Venezuela from 1997 to 2000, then in Mexico for a few more months, to be appointed as a substitute to the State Secretariat by John Paul II at the end of 2000. As such, he announced in April 2005 the death of the Polish Pope.

In 2007, Pope Benedict XVI appointed him. became Prefect of the Congregation for the Oriental Churches and elevated him to the cardinal's office in the same year. In 2013 he was in the conclave to the voters of his compatriot Jorge Mario Cardinal Bergoglio. One of not a few cardinals who supported the archbishop of Buenos Aires, contrary to the legend, that Bergoglio's election was an uprising against the Roman Curia.”

Francis can’t seem to help but sow discord and chaos as he continues on with his revolutionary program.

Who knew that Amoris Laetitia and its fall out would be so entertaining?
Posted by hereisjorgebergoglio at 2:14 PM