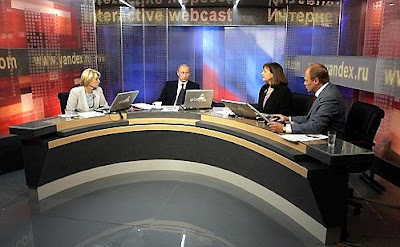 “If one wishes to find truth, one would better read the Bible, the Talmud or the Koran - these are much more helpful.”


Back in 2006 Vladimir Putin answered questions from his adoring fans in an internet conference hosted by Russian Yandex and the English BBC.  This conference lasted 2 hours and 15 minutes and consisted of 49 questions which were chosen from 150,000 by Putin.  It was during this conference, Putin explained why he pulled up a young boy’s shirt and kissed him on the stomach.   After the webcast was concluded Putin remained in the studio and answered questions from the reporters present.  One of the reporters read a question from a 29 year old Muscovite named Victor which was the third most popular question as voted on (with 16,000 votes) at the Yandex website. It read, “Ask the president what he thinks about the PRAYER FROM THE BEAR and about the intrigues of the wizard Cthulhu!”


Question : “How do you feel about the awakening of Cthulhu?”

Putin : “In general, I am suspicious of any otherworldly forces. If one wishes to find truth, one would better read the Bible, the Talmud or the Koran - these are much more helpful.”


And there you have it folks, Vladimir ‘defender of Christianity’ Putin telling his reverent followers who hang on his every word that the truth can be found in the Bible, the Talmud or the Koran!  Multi-culturalism is great for Russia as Vladimir believes truth is to be found in any of the Abrahamic religions!  What truth is this?

Posted by hereisjorgebergoglio at 8:09 PM